Google announced that its gigabit Internet service will soon roll out in Austin, Texas. Google Fiber offers almost 200 TV channels and download speeds that are about 100 times faster than typical home broadband connections.  Google hopes to begin connecting homes to Google Fiber by the middle of 2014.

Austin may not have Silicon Valley’s reputation, but the city is home to tech companies both big and small. It hosts the startup-centric SXSW conference each year. Until now, Google’s only offered its high-speed Internet services in some parts of Kansas City.

Google executives and Austin community leaders commented on what high-speed Internet could mean to Austin in a video posted to the Google fiber blog today.

“Data speed is like oxygen,”  said Google CFO Patrick Pichette. “You take it for granted until it disappears. Then it becomes everything,”

There are three Google Fiber plans currently offered in Kansas city and the offerings in Austin will be similar. The base plan is slow at just 5Mbps down and 1Mbps up, but free for seven years after an initial $300 installation fee.  The mid-grade plan is $70 per month and offers 1Gbps up and down. The top offering, Gigabit + TV, costs $120 per month. It comes with a settop box and Nexus 7 as a remote. 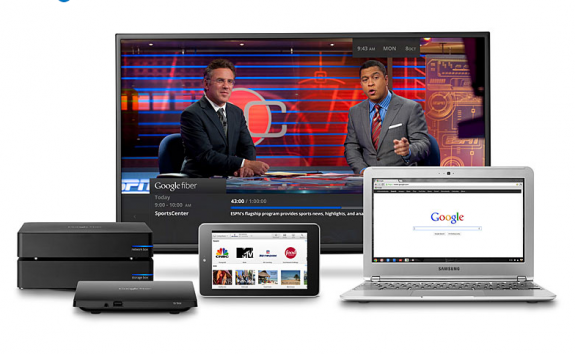 Google says it is planning to connect public institutions such as schools, hospitals and community centers at no charge as it rolls out Google Fiber in Austin.

While 1 Gigabit upload and download speeds will certainly prompt many to ditch their current Internet service providers and cable companies, its TV offerings fall short of what some are used to. The $50 monthly premium for the DVR, Nexus 7 and close to TV channels is certainly a better deal than what can be found elsewhere, the service is missing premium channels such as Showtime and HBO.

Google hasn’t hinted at where it will roll out Google Fiber next, but it’s clear that the Internet giant appreciates Austin’s mixture of tech chops and creativity.

“Austin will know exactly what to do with a Gig,” Kevin Lo General Manager of Google Fiber.