Seven new apps, including three from the most popular social networks will soon come to Google Glass, bringing more functionality to the wearable device.

Google wants developers to try creating new experiences with Google Glass, and it has four rules that it wants those apps to follow. Google asks that developers keep apps small for the small screen, make alerts as relevant as possible, send timely information and make tasks easier than they are on other devices. 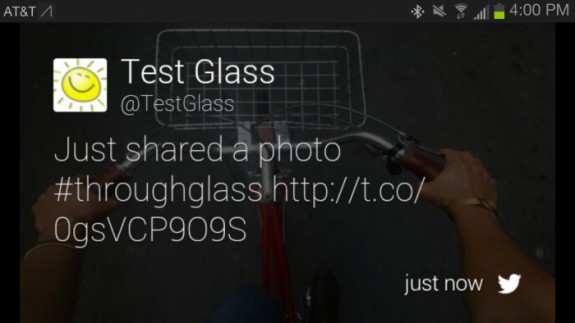 The Twitter app also lets users get notifications for DMs, mentions and Tweets from specific users. Users can then respond to those messages or just generally transcribe Tweets with voice.

Evernote also kept its app as simple as possible. Like Twitter, the Evernote Glassware app lets users save photos or video to their Evernote account. Evernote will also let users send notes to Glass through the web app so they can access it easily.

The example Evernote gives is a user sending a grocery list to Glass, making it easy to see what they need in the store without turning on a phone or consulting paper.

Facebook’s Glassware app will also let users post photos directly to Facebook, though there isn’t much more information about the app. Presumably the app either has more features, or will eventually have more features.

The Tumblr Glassware app lets users view their full dashboard feed, or just specific posts. There’s no word on how well Google Glass will handle all the animated gifs or how often the app will ask users to check their privilege.

As expected, CNN will send news updates to users that they can control. Users can choose the time of day the Glassware app sends updates as well as the categories of new stories they want to hear. The app can display the text of the stories, read the story aloud or play a video for the user.

Likewise, Elle will read stories from the popular magazine to Google Glass users. The Glassware app also lets users swipe through photos from the magazine and add stories to a reading list so they can read it on another screen later. Elle magazine has a team that will break up the stories in each issue to release as real-time updates so users constantly have new stories to check out.

Finally, Ice Breaker is a game designed to get Google Glass users to talk to one another. When they launch the game users will get a notification about another player nearby. The game encourages the players to meet each other and take a photo of one another to gain points. It’s an interesting way to give users an excuse to talk to others who had $1,500 to spend on Google Glass.