Google Goes Grassroots With Glass, Will It Work?

Wearable computing is still a relatively new space, and Google has been forging a bold, new path with its wearable eyeglasses called Google Glass, that provides an always-present, always-on experience between reality and computing. Essentially, you’ll still see what’s in front of you as you’re walking down the street, but glance to the side or glance down to the glass-mounted monitor and you’ll be able to see notifications, alerts, emails, Facebook posts, Twitter feeds, and more. The potential is there for Glass to be ground-breaking, but we’ve seen obstacles with Glass as well. Privacy concerns aside from Glass’ discretely mounted cameras, the wearable tech has been deemed by some to be too geeky, not fashionable, and a potential public embarrassment. Nergasms aside from the geek, vogue trend-setters are resisting the cyborg allure, but will they be able to hold out for too long?

Google’s answer to Glass’ problematic public image outside of tech crowds in New York, Los Angeles, and Silicon Valley is simple: use early adopters to evangelize the product. Early adopters, who are developers who were present at Google’s I/O 2012 conference and had pre-ordered Glass, now have a special invite to send to a friend to participate in the Glass Explorer program. That invitation doesn’t come cheap, however, as Glass as it stands is a $1500 piece of hardware, which Google says will cost less when it launches for general public consumption at a later date.

According to CNET, Google is allowing each early Glass adopter an invitation to send to friends to partake in getting their hands on Google Glass before it launches to the public. 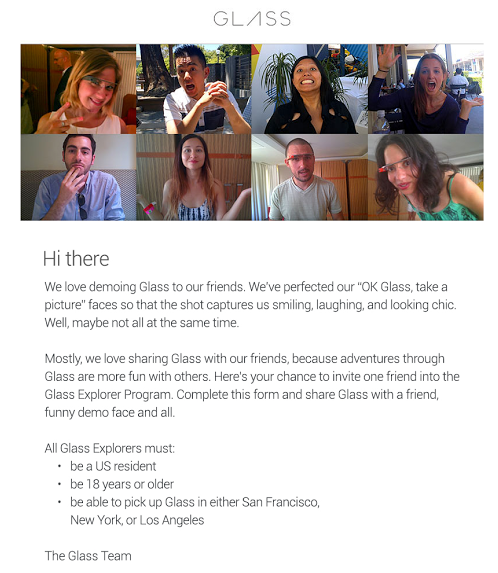 The grassroots strategy is not unusual for the tech giant. When the company launched its popular web mail program known as Gmail, or Google Mail, the company had started with 1,000 participants and offered each some invitations to friends and family to participate in the free hosted email service. In exchange for ad placement from Google, the emails were free and Google offered liberal storage at the time. The grassroots campaign was a success and invitations were not just coveted, but took Google’s brand to even more households as users switched from rival services at the time, such as Yahoo’s email service, Microsoft’s Hotmail, and AOL.

Google is trying to replicate the same success it achieved with the beta webmail program, but this time there is more at stake for consumers. Being chic and trendy with a fashionable web address with an @gmail,com account was one thing, but with Glass, you can’t hide behind the anonymity of the Internet if Google’s beta experiment doesn’t work. Instead, you’ll be seen–hopefully day in and day out–wearing your $1500 hardware investment, and as such, you’ll become the brand ambassador and public face to Glass. If it takes off, you can count yourself an early adapter if a game changing product, much like how early adopters of Apple’s iPhone feel when they had purchased that device in the summer of ’07.

Conversely, if Glass fails, you’ll be the unfashionable, geeky person who bet on the wrong technology. With more than just online reputation at stake, the battle of Glass may also jeopardize your street cred. And therein lies the problem. With many of my Glass-toting male friends who adore the technology, the resistance comes primarily from their female companions who don’t want to be seen with their other half in public with Glass. Can the geek of the family change minds and convince their better halves to partake? That should be where the first invitation to Glass Explorer should be sent if Google wants Glass to be a success: to the significant others of Glass wearers who may not currently be sold right now on trading in chic designer shades for cyborg eye patches.