Google Hangouts Update Turns Your iPad Into an iPhone

To a lot of users’ surprise, Google updated its Hangouts mobile app on iOS with a complete redesign that compliments the new iOS 7 look, as well as included full iPad support, marking the first time that a Google-based messaging app has come to Apple’s tablet.

The app has been available on the iPhone for quite sometime now, and the update includes a simpler UI that looks a lot like the Android version, but still has that iOS 7 feel to it. The iPad version sports a two-pane user interface, with a list of past and current chats on the left side, and a selected chat taking up most of the screen on the right side, with a little sliver on the far right that you can swipe in to start a video call with that user. 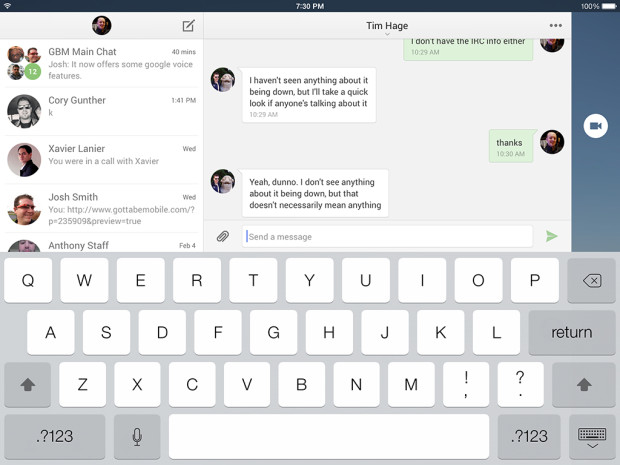 Perhaps one of the coolest features of Hangouts that you can now get on the iPad is the ability to make phone calls directly from the tablet, essentially turning the iPad into an iPhone.

Other nifty new features included in this latest update are the ability to record and send video messages up to 10 seconds long to other users and send a map of your current location to someone, similar to apps like Glympse and Twist.

Overall, the update to iOS 7 and the inclusion of full iPad support is a welcomed change and one that we’ve been waiting on for awhile now. Google has slowly been making its way around to all of its iOS apps and updating them with full iOS 7 support. Gmail, YouTube and Google Maps have all been updated with iOS 7 support over the last several months, but some lesser-known Google apps have yet to see an update, including Google Voice. However, we have a feeling that Google will simply merge Google Voice with Hangouts before too long.