Visitors to Google.com are being greeted with an unusual site today. Instead of the standard Google logo or one of its creative Doodles that pay homage to current events or historical figures, the company is blacking out its logo today to protest SOPA and PIPA, two pieces of legislation that many see as a threat to the Internet as we know it.

Google’s logo today has a black box over it, symbolizing a censored Internet. Clicking on the black box leads to an online petition and education page. Despite the unusual black bar over the logo, Google is still functioning normally. Typing search queries into the search box and hitting “Google Search” or “I’m Feeling Lucky” will bring up the same search results and sites as usual.

According to Google, SOPA and PIPA would do little to actually undermine those  distributing copyrighted movies and music illegally:

To make matters worse, SOPA and PIPA won’t even work. The censorship regulations written into these bills won’t shut down pirate sites. These sites will just change their addresses and continue their criminal activities, while law-abiding companies will suffer high penalties for breaches they can’t possibly control. 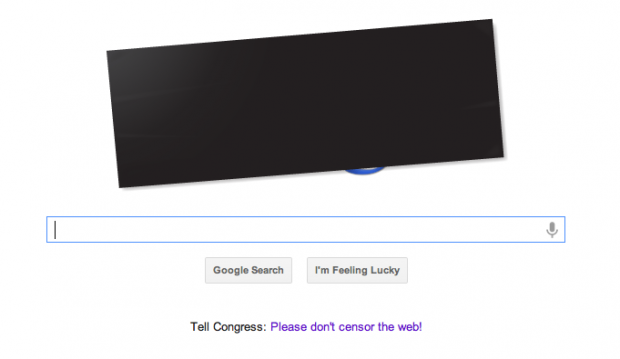 The Stop Online Piracy Act (SOPA) is making its way through the United States House of Representatives, while the U.S. senate is reviewing the PROTECT IP Act (PIPA). SOPA and PIPA are two bills designed to clamp down on overseas Web sites that violate U.S. copyright law. Opponents of the legislation argue the bills overreach and will unnecessarily harm the Internet and businesses that rely on a free and open Internet. Sites that primarily on link to third-party sources  such as Google, Reddit and Wikipedia are particularly concerned as they could be held liable for copyright violations under the new legislation.

Above is a video that Google put together that explains SOPA’s and PIPA’s consequences to popular Web sites and those who work for them.

Google is far from the only site protesting SOPA and PIPA today. While Google is simply blacking out its logo, other sites are going further. Wikipedia, Reddit, Craigslist and several other high-profile sites are shutting down their services for the day, opting to educate their visitors about SOPA and PIPA.

Google’s logo will return to normal after this one-day protest is over. You can read more about why your favorite Web site is down in our earlier article, which provides more links and background information.