Google Makes Sending Money as Easy as Attaching a File

Soon you’ll be able to attach money to an email just like a photo or file thanks to Send Money in Gmail, a new Google Wallet feature that rolled out to Google I/O attendees and will soon hit other Gmail users.

With the new Send Money in Gmail feature, users just click on the attachment icon in Gmail to attach money from a Google Wallet account and send it to another Google user.

The service will only let users send from a Gmail account, but the recipient doesn’t need to use Gmail. 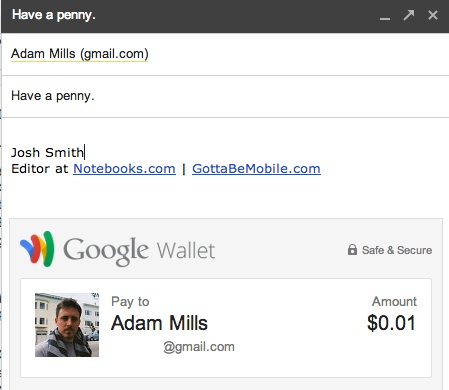 With Send Money in Gmail, users can send money with Google Wallet right from Gmail.

We tested out the feature on a Google Apps account so it should roll out to Gmail users and those using Gmail in a Google Apps environment in the near future. For the start of this PayPal competitor, Google will include an invite with any money you send, so there’s need to worry if a Gmail user can accept the money. Even more, there is an option to

Wether they will want money in their Google Wallet account is another question. For this Google includes a decline option that will send the money back to the user.

The video above shows how Send Money with Gmail works in Gmail in Chrome. It’s not clear if there is a mobile option in the works.

Google didn’t show this off on stage, but is rolling it out to several thousand users today and will expand as they send money.

The service is clearly designed to compete with PayPal. While Google Wallet faces an uphill battle in adoption, the ability to send money directly from is an advantage. Google Wallet is still not available on many Android devices, and while it can be used to send money on the web, without a mobile app it is still behind PayPal.