After having launched its third-party mapping and navigation application for the iPhone after Apple had shunned Google services for iOS’s Maps app on iOS 6, Google is now making Google Maps available for iPad owners. Hints at an iPad-specific version appeared about a week ago when Google updated the iPhone Google Maps version, and now the second version of the Google Maps app is a universal app, meaning that the same download would work for the iPhone and iPad tablets.

iOS tablet owners now have the same voice-guided turn-by-turn navigation and local discovery features available to Android slates in the past.

The application was posted online to the Apps Store late Tuesday evening as a free download. 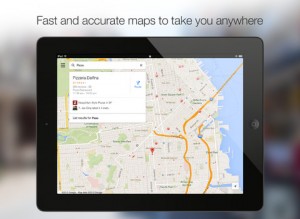 Here is what Google is listing as some of the new features in version 2.0:

The iPad edition appears to be optimized for the device’s larger screen as well. Though multi-panes aren’t used for the tablet, overlaying information onto the mapping area enhances the view available.

With the growing popularity of using iPad and iPad mini as in-car computers thanks to some clever hardware hacks, the iPad and the smaller mini could now be used with Google’s free data-driven mapping service and could even replace in-dash and more costly GPS systems. Always-on 3G or 4G connectivity also means that Google Maps will stay up to date and users will have access to the latest POIs and mapping information as they get added, revised, or removed from the system due to changes.