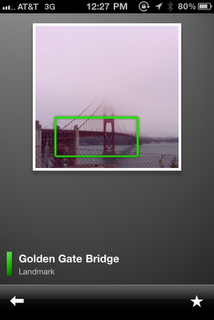 Google Goggles is now available in the Google Mobile App for iPhone. This feature makes it possible to search for more information about buildings, landmarks, DVDs, books and other physical objects using the iPhone’s built-in cameras. Until now, Google Goggles was only available on Android phones.

To use Google Goggles, you’ll need an iPhone 3GS or iPhone 4 with iOS4. It doesn’t work on previous versions of the iPhone because they don’t have auto-focus.

Google Goggles does a decent job of recognizing famous objects, such as the Golden Gate Bridge, and text, but it’s still a bit of a novelty app. Pointing it at a car or a person won’t yield much.

That may change as Google recently acquired Like.com, which has developed some impressive image matching tools. In the future, you might be able to aim your iPhone’s camera at a stranger’s outfit and get a rundown of what she’s wearing and where you could buy the same outfit. Or maybe you’ll be able to snap a picture of a cool car and find out where you can buy a new or used version of it nearby.

Google Goggles might not be ready for prime time, but it’s worth keeping a close eye on this Google Labs project.