Since this new feature is available in just an alpha build, you’ll have to enable it by switching on the Google Now flag by navigating to chrome://flags/#enable-google-now and flipping the switch, but once that’s done, you’ll be able to enjoy customized updates that was only available on mobile devices in the past.

However, numerous Google Now cards are missing, including public alerts, nearby photo spots, activity summaries and stocks, but it’s more than likely that Google will keep adding new cards to Chrome before the final build releases to the public. 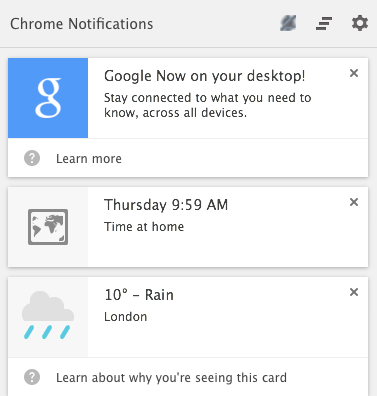 Rumors of Google Now coming to the Chrome web browser have been swirling for well over a year, but we’re finally seeing so official proof from Google that the feature will finally be heading to the desktop at some point in the near future, depending on how quickly Google can push out the final build to the public.

For the time being, there have been a lot of alternatives that Chrome desktops users have taken advantage of, and even Google released its own “New Tab Page” Chrome extension that resembled Google Now with the familiar card layout. That was one of our first clues that Google Now would come to Chrome, but we still didn’t know for sure, until now.

Of course, it might be a couple of months before Chrome officially tacks on the feature, but it’ll be a huge step forward for the Chrome web browser, and avid Android users will no doubt get a kick out of using it.