Google Now for iPhone is ready for release, but it’s still working its way through Apple’s App Store approval process.

TechCrunch reports that Google chairman Eric Schmidt discussed Google Now for iPhone and iPad at Google’s Big Tent event in India. A video of the event shows Schmidt answered a question about Google Now about 18 minutes into his talk. When asked about when Google Now will come to the iPhone the chairman said “You’ll need to discuss that with Apple.”

Edit: Apple says there are no current Google apps in review for the App Store according to a report from The Verge. It’s not clear what Schmidt referred to in his quote, unless Google has future plans to release an app with Google Now, at which point it will be up to Apple to approve it or not.

While the Google executive didn’t confirm that Apple is still reviewing Google Now for iPhone, he certainly hinted at it strongly. The comments are similar to rumors about Google Maps before the app came to the App Store. That app eventually came to the iPhone. There was no evidence that Apple withheld the app.

Apple does have a history of taking a long time to approve Google apps such as Google Voice, which Google submitted to the company months before it finally came to the App Store.

Recently a video of Google Now for iPhone appeared on YouTube, though Google pulled it down very quickly. The video showed Google Now as part of the Google Search app for iOS. In the video users can access the service by swiping up in the app, similar to how Android users launch the service. 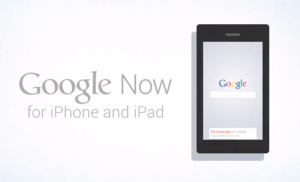