Today at Google I/O 2013 Google announced an expansion of Google Now, bringing new cards and features to Google Now on Android, and we’ll see some of these features land on Chrome.

Google Now will support time, dates and locations for Android. Users can now tell Google to remind them when to do important tasks.

As part of Google Now, users can quickly ask to be reminded at a specific time or place. In the demo a user set a reminder for when she arrived in New York.  After an imagined journey, Google Now reminded the user to call her friend Katie, right below a Google Now hotel reminder. 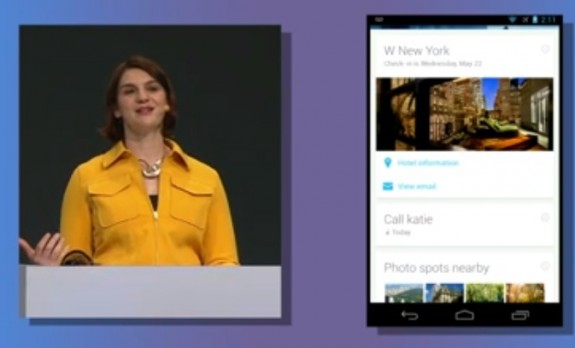 This is an important addition to Google Now. Apple offers reminders on iOS and OS X, which syncs reminders across all Apple devices seamlessly. Users can create reminders in IOS using Siri, making it easy to set up tasks for times, dates and locations.

Google Now is a direct competitor to Siri, but many argue the predictive nature of Google is much more useful. When arriving in San Francisco for Google I/O the service was quick to provide my hotel information so I could tell the taxi driver. When I am ready to head back it will tell me the flight information, all without me entering any information in Google+ specifically.

It’s not clear yet if Google Now reminders will come to the web, which is an integral part of any reminder system. Access on any Android device is great, but there are times when users will no doubt want to see their tasks in Chrome.

Another nice feature that Google Now can do is pull up photos from a previous trip or location. By asking Google Now to show photos from her last New York Trip, the user gained fast access to her most recent New York City photos. This is very likely tied into the Google+ photos service which users now have more reason to use.