If you’re the proud owner of the HTC One, One Mini, or plan to buy the recently announced HTC One Max, we have some excellent news. It appears that Google and HTC have partnered up to offer all smartphone buyers of its devices 50GB of free Google Drive cloud storage space. We’ve seen similar offerings with Dropbox, or LG and Box.net, and now it is Google’s turn.

We’re hearing from Android Police this is currently live with a few owners outside the US that already have the HTC One Max. Simply launch the Google Drive app on your compatible HTC device and the promotion and free storage appears. You’ll get 50GB free for 2 years, but it looks like the HTC One may only get 25GB for some reason. If you need additional storage this is one excellent way to get it.

It looks like all HTC smartphones that will be updated to the latest Android 4.3 Jelly Bean, and more importantly, Sense UI 5.5, will get the free cloud storage. Current One owners aren’t seeing this deal, but once they get the update and Sense UI 5.5 you’ll be able to take part in this nice little offer.

LG and Sony have offered similar deals, and Google’s even tossing out free Cloud Storage with all new Moto X purchases, so this appears to be a pretty common occurrence. With more and more smartphones coming without micro-SD slots for expanding storage, cloud storage options will become more and more important. 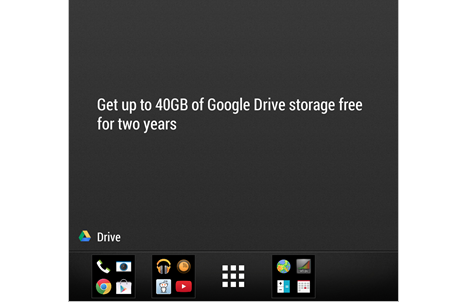 Once the HTC One gets Sense UI 5.5 simply open Google Drive and the notification should appear, and you’ll have 25GB of Google Drive cloud storage for 2 years. Add that to the 15GB you get out of the box, and that’s why you see 40GB above. Many Samsung fans who bought the original Galaxy Nexus might be familiar with this, as Dropbox offered 50GB free. Which is actually ending right about now. In fact, I lost 50GB of my free 2 year deal from Dropbox just last week in a quick email from the company.

There’s no official confirmation from HTC or Google of this promotion, but we’re getting mixed scattered reports that the deal is indeed real, and available as we speak. Give it a try and enjoy that free cloud storage. You never know when you might need it.