At the 2014 Google I/O Conference, Google talked about lots of changes on a number of fronts including the next version of Android, blending Chrome and Android, and how Google is going to make your connected life easier to follow from your fitness center to your car to your home. While the connected life Google is promising does indeed offer promise in the future, one of the more immediate changes Google rolled out will certainly give those who need to get work done food for thought when it comes to creating and editing documents. In a very competitive move, Google has now made it easier for users of Google Drive and Google’s Office Apps to edit documents, spreadsheets, and presentations directly in those Apps without having to rely on Microsoft’s suite of Office Apps, Office 365 or OneDrive. 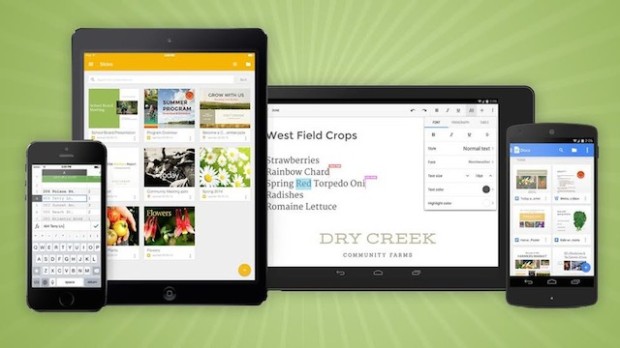 In other words, if you prefer to work in Google Docs, Sheets, or the newly released Slides, but those around you are stilling using Microsoft’s software, you can now work with and save the documents they create in the Google Apps in their native Microsoft format without having to go through a clunky conversion process. Of course you can convert the documents if you want to, but it is no longer a requirement to do so when working on a mobile device.

There are several bits of news to note. First, Google has finally added the Slides App to accompany Docs and Sheets for the Android platform. iOS users still have to wait for the Slides App to make its appearance on that platform. Second, Google has updated the Google Drive App for both iOS and for Android. The Google Sheets App for Android has been updated, but it has not been updated for iOS as of yet. And, so far, there has been no update issued for the Google Docs App for either platform. Suffice it to say, changes are in process.

Next, the three big competing productivity players (Microsoft, Apple, and Google) all tie their Apps together with cloud storage. We’re in the middle of a cloud storage price war for both consumers and business. Google announced at I/O 2014 that business users can now get unlimited storage for $10 per month per user. This comes after a March 2014 price change on the consumer side that dropped the price of 100GB of storage from $4.99 to $1.99 a month.

Apple and Microsoft have recently adjusted their cloud pricing as well. Apple users will be able to purchase 20GB a month for $1.00 and 200GB for $4.99 a month. Microsoft OneDrive users who are Office 365 subscribers now receive 1TB of storage for their $6.99 or $9.99 a month subscription costs. It used to be 20GB a month.

It’s tough to do a complete comparison about Google’s productivity suite of Apps this soon after the important I/O announcement because things seem to be a work in progress. But here are some observations.

The Slides App is brand new and only available for Android at the moment. 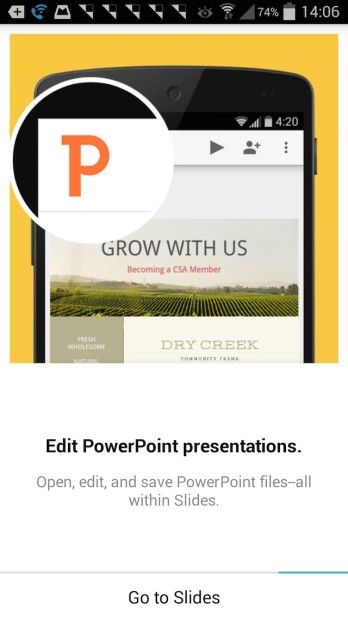 The web version of Slides hasn’t apparently caught up yet to the changes for the new mobile version as slides that display properly on the Galaxy Note 3 do not display so in the web version.

The Sheets App on Android does indeed open a Microsoft Excel file natively without asking to convert it. To open editing controls for formatting cells or data the procedure is different for Excel files than it is for Sheets files. In an Excel file you have to double tap the cell you wish to edit to bring up a control to edit a cell or text. That requires an additional tap. With a Sheets file that control appears at the top of the page, ready for you to tap to access those controls once you open your document.

That is a both a matter of style and workflow need for most users. For those who don’t require as many bells and whistles, Google’s office Apps will probably suffice just fine. Those with heavier work demands may still prefer the Microsoft mobile offerings.

But what Google has accomplished by adding native editing of Microsoft Office documents is to provide businesses with more choice than they had before when it comes to deciding on which Apps to provide for its employees. It is one thing to standardize internally but we all work with many others who use the traditional Microsoft Office standard. Google has now created a situation where it is easier to use Docs, Sheets, and Slides to collaborate with partners and customers who prefer Word, Excel, and Powerpoint.

At the moment, the new changes appear to be a work in progress though. We’ll keep an eye on these Apps as they are updated and keep you posted.