Starting today Android users can download an application that allows them to earn Google Play credit for sharing their opinions on certain topics.

Dubbed Google Opinion Rewards, the application allows users to quickly access and answer questions posed by researchers in exchange for Google Play Store credits that can be used to purchase apps, music, video or books.

Users who download Google Opinion Rewards will get a notification about new surveys once a week. Google promises that these surveys will be short and “relevant” to each user. Sample questions for the service provided in today’s announcement include “Which logo is best?” and “Which promotion is most compelling?”

Google Opinion Rewards allows researchers using Google Consumer Surveys to connect directly with subjects. While it won’t cost users anything to join the service, submitting surveys to Google Opinion Rewards users will cost researchers. They will be able to look at the relevant data and submit new questions to Rewards users with a new app that Google says will arrive in the next few weeks. 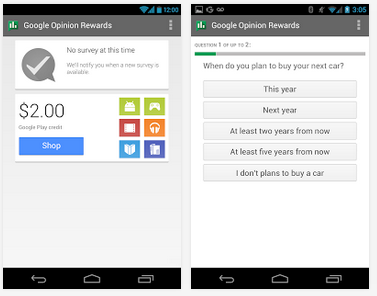 There’s just one caveat for users looking to earn credit to buy their favorite television shows and movies by answer questions. At this time Google Opinion Rewards is available to users in the United States. Those outside the United States won’t be able to download the application.

Google may have managed to revolutionize the way researchers get the information they need from subjects. Traditionally, the polling and research industry is dominated by firms who manage large phone banks that randomly call households that may or may not fit the research criteria.

Similar schemes for reaching consumers have been tried in the past. For example, Locket allows users to earn gift cards by replacing the Android home screen with advertisements.

Read: Get Paid for Looking at Your Android Lock Screen with Locket