If you’re experiencing issues with Gmail, Google+, Google Hangouts or some other Google services at the moment, it appears you are not alone. There is a major Google outage ongoing, although its Dashboard is not reporting any issues at the moment. Users from various quarters are reporting issues like the ones pictured below. The services appear to be down on desktops as well as mobile devices.

Of course the Twitter and other Internet sources are full of snark and derision about the outage, with some users saying that this time next year everyone’s heat will get turned off thanks to the NEST acquisition. 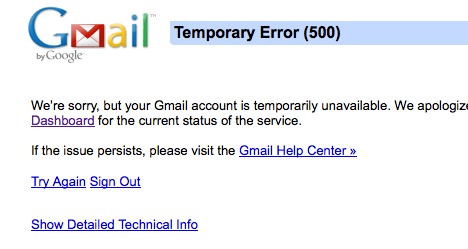 UPDATE: Things appear to be coming back to normal slowly as Gmail and Google+ are now back for some.

UPDATE 2: Then again, maybe not. Other users are still reporting issues and not being able to access contacts. This looks like a moving target.

UPDATE 3: Google’s Dashboard now lists that Gmail is having troubles and Google has confirmed there are problems. But if you’re a Gmail user, you knew that didn’t you.

UPDATE 4: This may or may not have something to do with the outage. Apparently a glitch in Google Search has been causing thousands of emails to go to one users Hotmail address.

UPDATE 5: It appears the situation is over. We’ll report when we hear the “official” word on what happened.

Final UPDATE: Google has provided a post mortem of the outage that affected Gmail, Google+ Calendar, and Docs today. According to a blog post the outage was due to a bug that caused “internal system that generates configurations—essentially, information that tells other systems how to behave.” Google says it has fixed the problem and is taking steps to make sure it doesn’t happen again. You can read the entire report from Google here.