It’s clear that Apple’s new Maps application is struggling with its fair share of issues,which is why its strange that Motorola decided to fake an address to mock Apple’s mapping effort.

According to AppleInsider the address Motorola used in an image on Google+ isn’t accurate. The problem in the “iLost” image is Apple’s Map actually has a more correct response.

To demonstrate the difference Motorola used the address “315 E 15th Street.” The Motorola RAZR M showed an image in Manhattan while Apple Maps showed a street with a different name in Brooklyn. The address shown in Google Maps doesn’t actually exist, however. 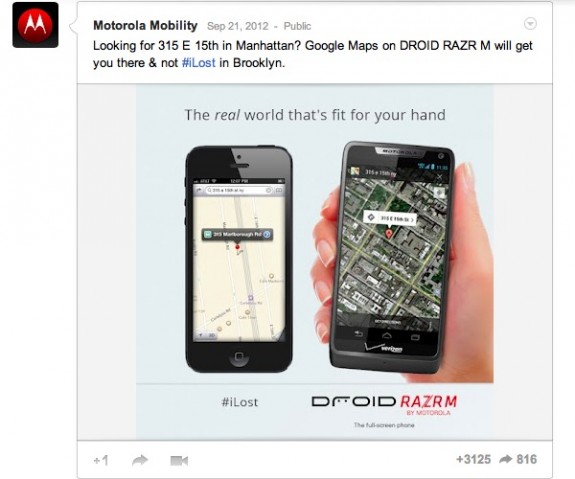 The pin for 315 E 15th Street in Google Maps is in a park in Manhattan, which doesn’t actually have a street address. The pin in Apple Maps is on Marlborough Road, which turns into E 15th Street in the 800 block of buildings. So in truth, Apple’s app is more correct than Google’s which returns an address that technically doesn’t exist.

Adding “Manhattan” to the end of the Apple Map search will show the same results as Google Maps. Again, the pin drops in the middle of a park where a building marked 315 would be if it existed.

It is strange that Google-owned Motorola would use the address in an ad when its service is the incorrect one as there are legitimate problems with Apple Maps including entire streets that don’t appear in the app and local businesses placed in incorrect towns. Gotta Be Mobile staff encountered both issues in our testing of the app.

Apple Maps changing the street name and placing a pin in a different borough looks pretty bad, but it’d make Apple look worse if the example given was a real problem.