Standing somewhat close to a major landmark but don’t know where you are? Hopefully, with Google’s patent application, there will be an app for that soon as the software giant has created a system where a user can snap a picture of a nearby landmark, upload it to Google’s servers, and Google will do the math to identify where you are–and hopefully how you can also navigate to said landmark.

The idea itself isn’t novel. GPS navigation software-maker Navigon has had a similar feature in its Navigon app for some time now known as Reality Scanner, which turns on when you start the GPS app to let you take a picture of a nearby landmark and then offers you direction to that place of interest. The feature is a mixed bag and sometimes can identify landmarks while other times it cannot. 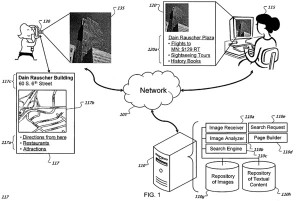 One potential use for Google’s feature is with its much speculated head-mounted display, which may come with some sort of augmented reality function. This way, if those goggles can always identify places that users are looking at or seeing, Google could potentially push out more relevant content and advertisements to users.

Another application would be to integrate this with Google Places and Google Maps with Navigation on Android smartphones, allowing users to navigate to places that they see in the near distance, but don’t know what those places are called or don’t want to look them up in the POI listing, like on Navigon.

It’s unclear if Google will commercialize or use this patent, but the potential is out there for mapping, location-based services, and other projects.