This news comes the day before Google Glass goes on a one day sale to the public. It comes one day after reports of another Google Glass user being assaulted for wearing that device. The news comes from Patent Bolt that Google has filed for a patent on contact lenses with a camera. Imagine being able to take a photo via a contact lens simply by looking at the subject.

For those who may be concerned about privacy issues that Google Glass potentially represents, this will certainly be another focal point. But for those interested in the advance of this sort of small sensor technology, this news builds on Google’s recently announced Smart Contact Lens Project. That announcement came with news that Google had been working on a smart contact lens that would embed a small glucose monitor and chip to help detect a user’s blood sugar levels. That could be a boon to those with diabetes and need to monitor their blood sugar.

This new news takes the idea of personal photography that might not be viewable to the subject of the photo a step further than Google Glass. It also offers the potential for helping those who may be visually impaired. 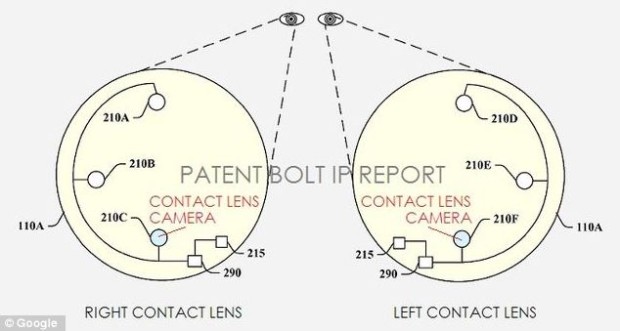 As described the patent info shows that this technology could be used to help the visually impaired perhaps cross a busy crosswalk. With chips that can communicate to a user’s smartphone, the example given is that of person approaching a crosswalk and receiving audible information via their smartphone telling them when it would be safe to cross that intersection.

“One of Google many patent applications regarding future smart contact lenses generally relates to systems and/or methods for capturing image data representing a scene in a gaze of a viewer via a thin image capture component integrated on or within a contact lens, processing the image data, and employing the processed image data to perform functions locally on the contact lens or remotely on one or more remote devices. The term “images capture component” simple means a camera.”

The idea is that the camera could be used to take a picture of something simply by looking at it. The patent allows that it could be possible to have multiple cameras in one contact lens and that the camera may have zooming capability. There isn’t a product announcement but only a patent application, so whether or not this comes to be is anyone’s guess.

That said, the ramifications of this patent discovery by Patent Bolt will certainly add fuel to the fire of those who think the soon to be publicly available Google Glass goes too far when it comes to impinging on the privacy rights of those around a Glass wearer. Google so far has officially stayed away from facial recognition as a feature of Google Glass, even though the technology exists to make it happen as a developer proved recently. But this new technology theoretically could use facial recognition to help a visually impaired individual to recognize an individual or individuals within the camera’s view. Tricky stuff.

With those issues being debated on legislative levels and in businesses, we’ve already seen several situations where Google Glass is viewed more as an intrusion than a benefit. Some even see the innovation as possibly illegal in some circumstances. In one controversial incident a viewer in a movie theatre had his Google Glass removed forcibly, and he was detained under suspicion that he was illegally recording the movie. In a California case a woman was given a ticket for driving while wearing Google Glass. That ticket was later rescinded.

These are tricky issues that are coming to the surface in exciting times for technology. Technological advances are making advances potentially possible that seem like yesterday’s science faction. Those advances could be of great benefit to both society as a whole and also individuals who might be able to take advantage of the technology to make living with certain health conditions easier.

But the other side of that coin has to do with how that technology can strain our legal and social systems that are not prepared to deal easily with some of these potential changes or the pace at which they may arrive. By their nature those systems are more reactionary even when they are attempting to be pro-active. These kind of technological innovations may be ready for introduction to society long before society has had the time to examine the good and/or the bad that they may offer.

That friction is nothing new as history is filled with examples when new innovations have created disruption to all aspects of life as it existed when something new and bold came along. The difference in our current age is the potential for a much quicker disruption cycle that increases the friction as societal structures have a tougher time keeping up with a faster pace of implementation of innovation.

Again, this may just be a patent of an idea that holds potential that will never turn into a product. What makes it an interesting story is that the patent offers information about a technological advance that obviously builds on technology that hasn’t even made it to the mass market yet and is already causing ripples of disruption and friction on a number of levels.

We live in interesting times.