With all sorts of Cyber Monday deals happening for smartphones, Xbox games, and even the iPad, Google’s joined the fun with plenty of discounts for Android smartphone and tablet users. Not just apps and games, but 100 bestselling books too.

Kicking off Cyber Monday Google’s announced plenty of different deals, but most are little apps here and there for $.50 cents off and some going free, but the big deal we spotted was in the books department. Google is still busy building up the Google Play Books, as well as Magazines and Newsstand app content, and today’s book offering is getting a major discount. Seeing deals reaching 75% off for many bestselling books and more. 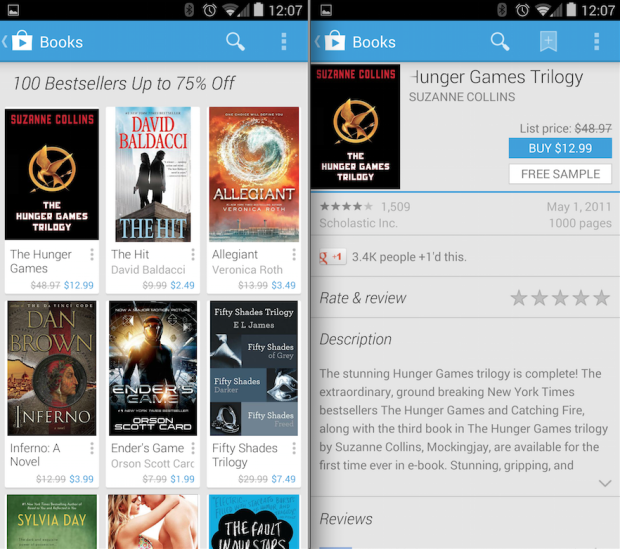 We expected to see some older books, Harry Potter options, and plenty of reading material that wasn’t that great, but Google surprised us all by offering the top 100 bestselling books all at crazy low prices. Things like the entire Hunger Games Trilogy (Go Katniss) for around $12 and some change, 50 Shades of Grey is also on sale — the entire trilogy — as well as other popular titles such as Ender’s Game, Hobbit, and even Steven King’s The Shining.

Some of these are as low as $1.99 per book, with entire trilogy packs being offered for as little as $12.99 in some cases. The 50 Shades of Grey Trilogy is only $7.49, for the saucy ladies, and that’s only the beginning. Google is offering quite a bit here, so check it out.

If you’re looking to get in on the action all of the deals are available at this Google Play Books page, and more are expected to arrive soon. If you’ve been looking for a great collection to stock your digital book collection for some holiday reading, this may be the best opportunity for Android smartphone and tablet users. Google’s been expanding books support to more regions, so hit the link above and get the deals while they last.

At the same time Google has tons of deals on games like FIFA 2014, The Sims, and many many more so be sure and head to the Play Store online or on your device of choice to catch them all.