The Google Play Store has seen a lot of changes over the past year, but it’s about to get even better. From Android apps on Chromebooks, sharing Google music with friends and family, to the latest change announced in July that is the new Google Play Family Library. Essentially allowing family members to buy an app once, and share it with up to six people. Here’s everything Android users need to know.

We’ve been hearing reports and rumors about the Google Play Store adding options like this for nearly a year, but it never arrived. Last year they added family subscriptions to Google Music, but that was just one of many big changes the company had planned.

Read: How to Add a Password to Google Play Store Purchases

On July 27th Google confirmed a brand new feature called the Google Play Family Library. This will allow users to authorize six family members (or friends) access to apps, games and more that have been bought on the app store. It’s a big change that everyone needs to know about, and use. 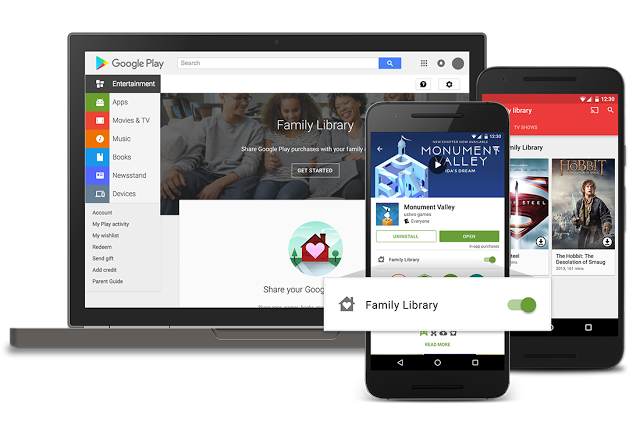 Being able to buy an app, game or movie once and share it with six different people is a big deal. This will save families tons of money, and let everyone enjoy games like Minecraft without every single person buying it. There are some restrictions, apps that need to be eligible, and regional restrictions for now, and we’ll explain all of that below.

The Family Library is rolling out in multiple regions including the United States starting July 27th, and users will start seeing a badge on apps and games in the Play Store that are supported. Once found, a user will be able to buy that app, and add six accounts to the shared list, or even block them if it’s something you only want for yourself.

Essentially users will be able to add six Google accounts to the Family Library, and all six accounts will be able to access apps, games, movies, TV and books that anyone buys. Google released a quick video to give us an idea of how this works and looks, which you can see below.

As shown above, a family member can buy a new movie like SuperMan (or a game like Minecraft) and the entire family will get it too. Rather than everyone having to buy it separately. This has big a big pain-point for a long time, and is finally coming to an end. Many families can probably relate to the problem, myself included, as I’ve now bought Minecraft three times for my family members. With this, that won’t be the case anymore. It’s worth noting that in-app purchases can’t be shared, which is where we see a lot of apps moving to in order to make additional income.

The Library is easily managed, and there’s even a single payment method that can be added — then secured with a password –allowing the entire family access to buy content from Google Play with ease.

What Can Be Shared?

According to the official announcement by Google, a lot can be shared, but not everything. For now it looks like only apps, games, movies, television shows, and books support Family Sharing, which is quite a lot.

Subscriptions and rentals are missing, for obvious reasons, but almost everything else can be shared with six members of the family on Google Play. It’s unclear if we’ll be able to add friends to the list, but we’ll update once we know more.

“All purchases added to Family Library are available across Android devices, and movies, TV shows, and books can be enjoyed on iOS devices and the web.”

We’re not completely sure how this works with iOS in terms of buying an app or game, but as the feature rolls out for more users we’ll have additional details to share.

All apps and games eligible to be shared in the Family Plan must be purchased after July 2nd of 2016. All purchases prior to that date will not be shared, unless the developer specifically enables the feature. I was hoping I could go back and share all my prior purchases, but that doesn’t appear to be the case for most. If a developer is feeling generous, they can enable sharing on old purchases.

That being said, everything purchased after July 2nd can now be shared once user accounts have been added to the Family Plan.

Family Library will be rolling out over the next few days and some users may already be seeing the option in the Google Play Store. It takes a quick sign up, adding new accounts, and you’re all set. Users can click here to sign up, although it may not be live for everyone quite yet. If not, try again tomorrow. 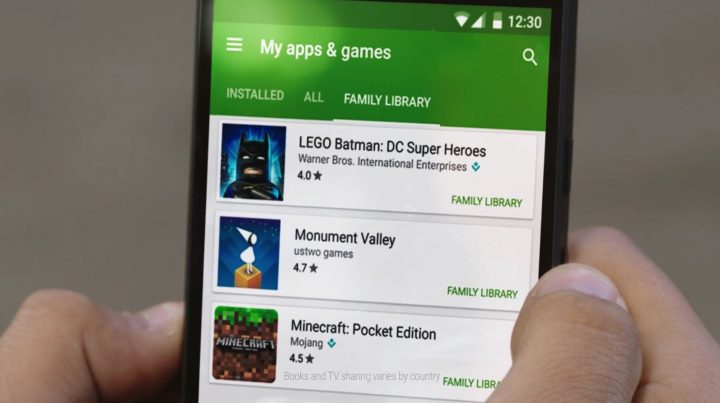 As you can see above there is a new column in the Google Play Store that will easily show all current content being shared. Perfect for managing, adding or removing accounts, and knowing exactly what is going on with all apps.

It will be available in Australia, Brazil, Canada, France, Germany, Ireland, Italy, Japan, Mexico, New Zealand, the United Kingdom and the United States. Other countries will likely be added to the list later this summer or in the coming months. It’s also worth stating that book sharing is unavailable in Germany, Italy, Japan, and Mexico for whatever reason.

As soon as this becomes live for more users, or becomes available in other regions we’ll update with all the details. Head to the Google Play Store on your Android device of choice and sign up today.