Google Play Music All Access, the music streaming subscription service the company debuted this month at Google I/O, is coming to iPhone and iPad users soon.

That’s according to remarks made by Google’s Sundar Pichai onstage at the D11 conference. While being asked by Walt Mossberg about why the company seems to have no problem making its applications and services available to users of Apple’s iOS for use on the iPad and iPhone, Pichai noted that the company does so because it’s “in Google’s DNA.” 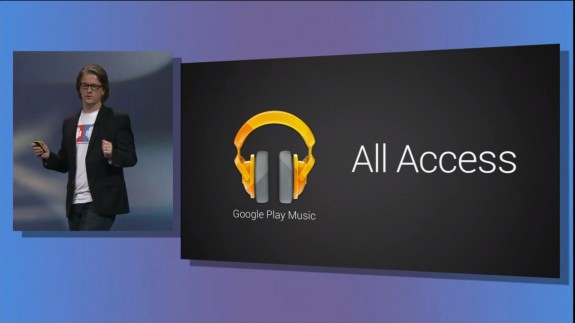 He then continued to say: “We brought Google Now to iOS. A couple weeks from now we will launch Google Play Music All Access for iOS.”

This is the first time that the company has publicly acknowledged any kind of timeline for Google Play Music All Access for iPad and iPhone users, though the company does indeed have a pretty decent track record of making its software and services available to users of Apple products.

It recently debuted an updated version of Google Play Games that will allow developers to bring multiplayer gaming and leaderboards to users on both iOS and Android. As Pichai notes, it also recently brought its real-time search engine, Google Now, to iPhone and iPad users via an update to its Google Search app.

Google Play Music All Access allows users to stream music to their Android devices or through an HTML5 web browser for $9.99. In addition to streaming, the service also offers a number of playlists curated by a team of dedicated staff. The company will allow users who sign up for a free trial before June 30th to get Google Play Music All Access for $7.99 once their free trial is up.

As with most of the services and applications Google offers on mobile devices, Pachai also maintains that if other platforms like Windows Phone and Windows 8 gather enough users Google, “will make apps.”

He did not detail any magic number these platforms would need to hit, an interesting convenience since Microsoft recently announced that 100 million devices had shipped with some form of Windows 8 installed.