The Google Play Store now uses Google+ profile information to attach real names and photos to app reviews according to a TechCrunch report.

Now users who want to leave a review of an app in the Play Store will need to use their real name and photo to comment. Older reviews won’t carry a user’s name and Google+ profile. Instead Google will change the name for those reviews to “A Google User.” That way users won’t have their previously anonymous reviews linked to their public profile.

The move is similar to one Google took with YouTube recently. Google doesn’t require YouTube viewers to use their real name, however. The YouTube change didn’t change the overall quality of YouTube comments, but some anecdotal evidence says the number of useful comments on videos increased when users had their names attached to their comments. 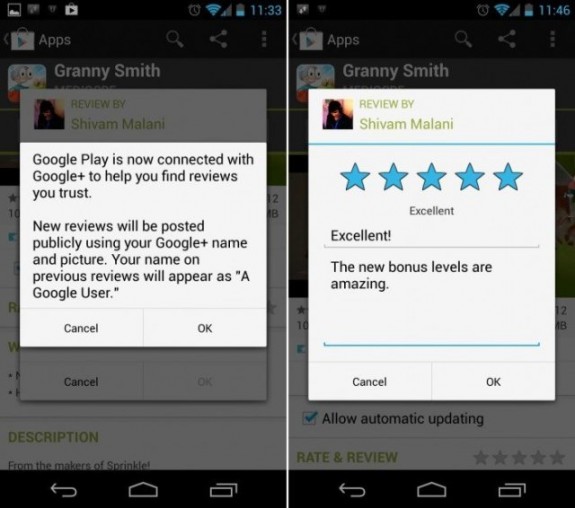 Google likely hopes that requiring real names in reviews will help cut down on spam reviews and increase communication between users and developers. Users are more likely to give constructive criticism or at least not post useless reviews if the content is linked to their real names.

A good example of how anonymity hurts the quality of reviews is the iOS App Store. Popular apps typically have a lot of reviews, but many of them are just a few words saying they do or don’t like the app or are just several lines filled with nonsensical Japanese emoji. Apple also had to clamp down on fake reviews that inflated the rating of an app in the past, something Google’s new system may help combat.

By changing reviews to use real names Google will likely decrease the number of reviews in the Play Store, but that could be a good thing as long as the remaining reviews increase in quality.