Google Play Store 4.4 Update Rolling Out Now, KitKat Up Next

Over the past two or three weeks we’ve seen Google update every one of its major applications on Android. From YouTube, Gmail, Hangouts, Maps and more, and now the latest one is the Google Play Store. Last week we shared details regarding a brand new slightly redesigned Google Play Store, and today it’s officially hitting users devices.

The new Google Play Store is version 4.4.21, not to be confused with Android 4.4 KitKat the OS, and is hitting smartphones and tablet as we speak. It’s been slightly redesigned with a brand new slide-out navigation system, and a few other behind the scenes tweaks. The important thing here being that the Nexus 5 and Android 4.4 KitKat are expected any day now, and with this being one of the last updates by Google, we should be learning more soon. 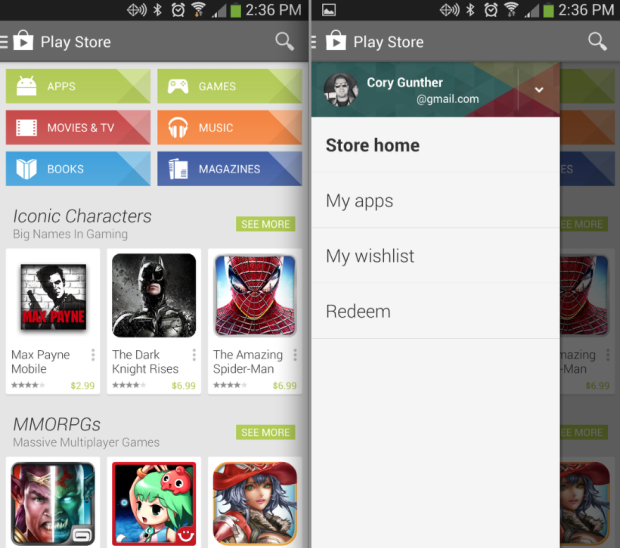 The new Play Store was first spotted by Android Police, who’s also pulled the file for download, as these updates can take up to 2 weeks at times to arrive for all users, and many would rather not wait. According to the reports the new Play Store has removed the menu-accessible buttons and pop-up to a simple slide-out navigation drawer off to the left. Just like we’ve seen with YouTube and countless other apps as of late.

Behind the scenes with the new Google Play Store is something called Newsstand, which will be a news section similar to Music, Books, Movies & TV and the rest. While present in the new Play Store, Newsstand isn’t yet available, and is one of the many things expected when Google announces Android 4.4 KitKat, hopefully sometime this month.

This could be a subscription based news section of Google Play, but for now all the details are just rumors and surely Google will be sharing more details sometime very soon. These small changes aside it doesn’t look like anything has changed in the Google Play Store for Android smartphones and tablets.

However, there is good news here. For one, this is version 4.4 of the Play Store, not to mention one of the last bundled apps made by Google we’ve been waiting for an update on. With nearly everything else seeing attention as of late, the actual release of Android 4.4 KitKat should be coming very, very soon. Latest rumors still have both Android 4.4 KitKat and the Nexus 5 being revealed on October 31st, and we’ll update the minute we know more.