Over the past few days and this weekend rumors started floating around, as well as some pictures, reportedly showing proof that Google and its Android Play Store were headed to BlackBerry, which could potentially save the ailing company.

The rumors went as far as to say the Google Play Store was coming to BlackBerry 10, and bringing with it hundreds of thousands of mobile apps. The important ones made by Google would require certifications from the company, which extremely important. The rest could still have a huge impact on the BlackBerry ecosystem through an official channel. The still image could easily be faked, but caused a flood of reports. Thankfully Crackberry confirmed that this was false from BlackBerry themselves. 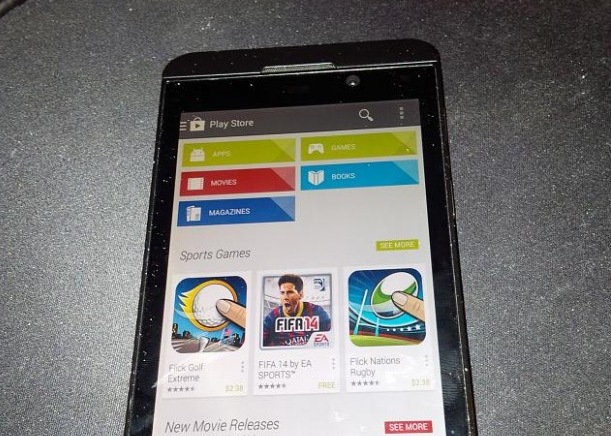 CrackBerry reached out to BlackBerry, formerly RIM, seeking more details and any clarification regarding the rumors, and received exactly what we expected. Outright denial. The rumor also stated that even without Play Store support, users would be able to at least fully sideload the apps and use them without issue. Something we’ve heard before, but only done under certain circumstances.

Apparently these rumors have all but been put to rest, as a BlackBerry spokesman had this to say:

“There is no planned support for Google Play on BlackBerry. BlackBerry World remains the primary source for trusted and curated BlackBerry applications and we continue to support open standards and open source tools so BlackBerry developers can continue to create great apps on any of the development platforms we support.”

If you, like us, were hoping some form of Android or Android apps would be available on some of those well-made BlackBerry devices in the future, that doesn’t appear to be in the cards. With the driving point being at the front of his statement, stating there is “no planned support” for Google Play.

So while we could see Android or Play Store support on BlackBerry one day, possibly down the road, at this point all signs are pointing to no with BlackBerry showing no desire to dive into it whatsoever. With recent talks of BlackBerry taking more of an enterprise route in the future, this makes sense as Android isn’t what we’d call the most enterprise friendly platform in the world.