This afternoon the Android and Google Play Store developer team took to their Official Android Developers Blog to not only confirm more than 70 million Android tablets have been activated, but that they’ll soon be focusing additional effort and space in the Play Store to highlight tablet apps.

Google announced that later next month, starting on November 21st, we’ll begin seeing multiple changes on the Play Store with an all-new tablet section that will take front and center on its storefront. Thanks to the 70+ million tablet activations mentioned above (and detailed at Google IO) and with strong sales of the new Nexus 7, they want to highlight and promote some of the awesome apps developers have created. 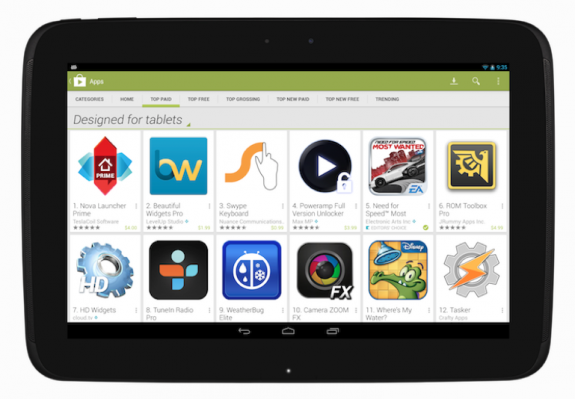 In other words, Google’s also telling developers that they better get to improving their apps to support Android tablets (looking at you, Twitter) because soon many of those apps could be front and center getting plenty of attention. Not only is this a push to get more apps to support tablets and larger screen Android devices, but it’s a call for developers to focus on tablets specifically as well.

Google will be highlighting and showcasing a brand new “Designed for Tablets” section in the Play Store, which should help more of those tablet-friendly developers to get noticed in the huge pond we know as the Play Store.

Another change, which will be behind the scenes and take effect in November, will have Android tablet users see the dedicated for tablets and top apps lists all default to tablet specific apps, instead of just top apps for the entire store like before. This is something we as Android users have been waiting for, and Google is finally going to deliver.