Today Google Reader, Google’s popular RSS feed reader, will shut down forever. But there are a number of alternatives to those who still want an RSS reader.

Google first announced it would shut down Reader a few months ago, which gave users and developers plenty of time to find another service. Now, on the final day of the service, there are a number of options for users looking for a new RSS feed reader. Many of those new options will let users import their feeds from Google Reader for a seamless transition. 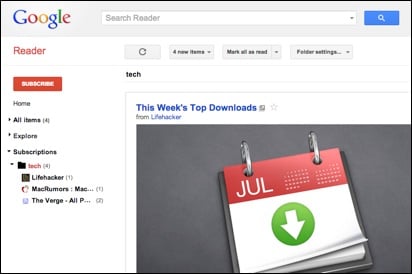 Some of these new options are free, while others may require a monthly or yearly subscription. Some come with their own iOS or Android apps and some let users choose from a variety of partner apps so they can customize their experience.

Digg Reader from Betaworks is one of the feed readers that came up as a direct response to Google shutting down Reader. The service looks very similar to Google Reader and uses many of the same keyboard shortcuts on the desktop. Digg Reader is free to use, and is a part of the Digg app on iPhone. An Android version is also in the works.

Feedly is one of the more popular Google Reader replacements that looks strikingly similar to Google’s service. Like Digg Reader, Feedly lets users import their Google Reader data for free while offering them mostly the same experience as Google. Feedly offers its own app for iOS and Android users, but also lets users choose their own apps. Feedly works with popular apps such as Reeder on iOS and Mac (in a future release), Press on Android and even NextGen on Windows Phone 8 and Windows 8.

Feedbin is one of the Google Reader replacements that asks users to pay a small monthly fee for the service. Feedbin lets users import their Google Reader data, but costs $2 a month, which is likely worthwhile for users who rely on an RSS reader everyday. Feedbin offers a desktop experience like Google Reader and lets users choose their own apps including Reeder, Press, ReadKit on Mac and Tafiti on Windows 8.

Other alternatives include FeedWrangler which costs $19 a year, and the upcoming AOL Reader, which is currently in closed beta. There is no shortage of replacement services all vying for user’s attention, which gives users the chance to choose whatever service works best for them.