Google had announced that it is cancelling its Google Reader RSS service effective July 1, 2013 with faithful news junkies hoping that Google would reverse course. However, when one door closes, another opens, and in the case of Google it looks like this will be the perfect opportunity to expand the Play Store franchise with another digital storefront. It’s speculated that Google will be replacing Google Reader with Play News, which would come in addition to Play Books for e-books, Play Movies & TV for digital movies and TV shows purchases and rentals, and Play Magazines for digital magazine a la carte purchases and subscriptions. 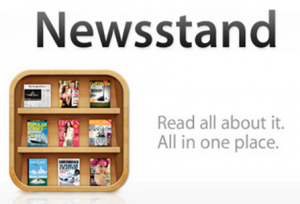 A Play News service would compete with Apple’s Newsstand service. Though Google may be separating magazines from newspapers, Apple’s Newsstand combines the two in its periodical service where users can buy single issues or subscribe to a longer-term subscription plan.

Details of the News Service right now are scarce, but Android Police caught wind of the JavaScript file and source code referencing the news service:

To read Google Play News, you must have a supported Android phone or tablet

Please sign in to purchase this News Edition Subscription.

Subscribing you to this news edition…

You have subscribed to this news edition. It is now available on your device.

It’s unclear at this time if the new Google Play News service will also allow RSS feeds or if it will cater to more professionally published sources.

A potential launch venue for Google Play News would be in mid-May at the Google I/O developer conference in San Francisco, California. Ahead of that show, we’re already hearing rumors for a number of new Google services in addition to Play News. There is also Google Keep, which is rumored to be either a Pocket or Evernote notebook replacement. Also rumored is Google Babble, which is an attempt to unify messaging and notifications across various Google products, including Google Talk, Google+ Messenger, Google Hangouts, Google Voice, and more.