The game, called Roll It, is just like the classic skee ball arcade game though it takes up far less room. To play the game users just go to this website and follow the instructions. The game lets up to three players compete for a high score using the same computer and smartphone.

After setting up the game the desktop browser shows the end of the skee ball lane with the holes players want to roll their virtual ball into. To roll a ball down the lane players can choose the angle of their thrown on their smartphone and make a rolling motion with the phone in their hand. The game feels very similar to bowling in Wii Sports. 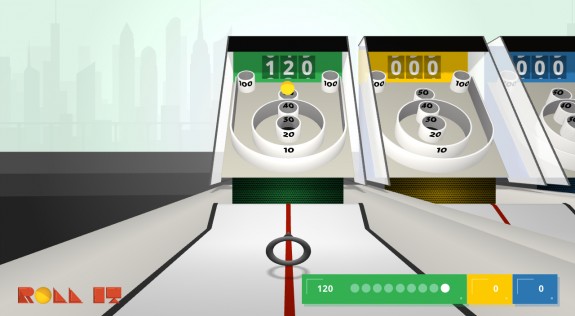 The game doesn’t necessarily control as well as Wii Sports, however. Results may vary, but the game ran rather slowly on a mid-2009 MacBook Pro using the latest version of Chrome. It was playable, but almost painfully slow at times.

It was also difficult to find the right amount of force to use when rolling the virtual ball. Often the ball would bounce against the scoreboard in the back and just roll into the 10 point hole. With practice the game gets a bit easier, however.

Even with its flaws Roll It is another great example of the power of web technologies. Playing a game across two devices using just the web browser is an impressive tech demo. As Racer proved before Roll It it’s possible to make fun games in just a browser. Roll It proves the chrome browser is capable of games that are a bit more complex than top-down slot racers.

These sort of browser-based games are still relatively new, and seem more like experiments, though perhaps someday someone will create a less gimmicky game that uses the technology.