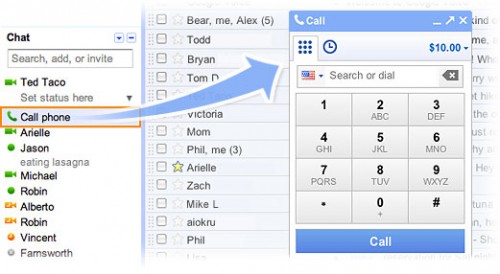 Google announced that its users will soon be able to place calls directly from Gmail. The VOIP service will be rolled out to U.S. users over the next few days.

The service looks like a nice companion for Google Voice as calls placed from Gmail.com will use your GV number for caller ID purposes. Calls placed to your Google Voice number will ring through to Gmail.

According to Google’s blog, calls placed to U.S. and Canadian numbers will be free, for at least one year. Like Skype, Google will offer cut-rate international dialing.

The feature isn’t live in my Gmail account yet, but I do look forward to trying it as soon as possible. I will give up my paid Skype services if Google’s new service works as advertised.

Kevin Purcell from Notebooks.com tried out the Gmail Call Phone feature  and seems to like it so far.