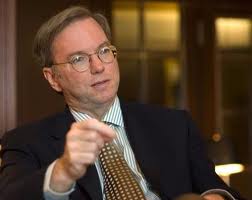 Eric Schmidt had lots of things to say yesterday at the Techonomy conference. One thing he commented upon was the future of the technology revolution and some of his comments can be filed in the “too big to wrap my brain around” section.

According to Schmidt, from the dawn of civilization until the year 2003 humans created 5 exabytes of information. But we now create that much every two days and the pace is increasing, he added. Schmidt went on to say that “People aren’t ready for the technology revolution that’s going to happen to them.”

He tossed off some examples such as:

If I look at enough of your messaging and your location, and use Artificial Intelligence,” Schmidt said, “we can predict where you are going to go.

Show us 14 photos of yourself and we can identify who you are. You think you don’t have 14 photos of yourself on the internet? You’ve got Facebook photos! People will find it’s very useful to have devices that remember what you want to do, because you forgot…But society isn’t ready for questions that will be raised as result of user-generated content.

He also touched on the possible abuses of having this kind of data out there, saying that to combat it we need true transparency and no anonymity, which I think is probably where the “people aren’t ready” part comes from.

It is mind boggling when (and if) you choose to think about the ramifications of it. Thoughts?