It always amazes me that tech companies love to let things leak right before they can break the news themselves. But I guess that’s what keeps the world spinning around. Google is about to start its IO conference tomorrow and tonight we’ve got two stories throwing fuel on the fire that Google is trying to move big time into the consumer media biz. I guess everybody has to have content going to fuel their mobile gadgets and TV replacement products.

First up, the Wall St. Journal is saying that Google will unveil its long awaited music service as early as tomorrow. According to the WSJ, Google has followed Amazon’s lead by not negotiating licenses yet, and the service will work by allowing you to stream music you own and upload. There’s no comment from Google on this officially but these things usually don’t make it to the Journal without some soft of official leaking going on.

The other announcement from TechCrunch is a bit more official and features Google moving into adding Hollywood movies to YouTube. You can actually go there now and check it out at YouTube.com/movies. Google has signed agreements with Sony, Universal, and Warner Brothers to allow you to rent and stream movies. Prices look to be pretty standard by now at $3.99 for first run and $2.99 for older flicks. Google has actually posted this on its blog.

I imagine we will be hearing much more about both of these moves beginning tomorrow. 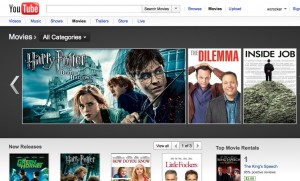