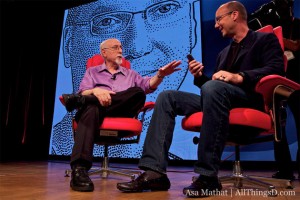 Is Google’s Andy Rubin off the reservation, speaking the truth, or just dealing with jet lag? At the AsiaD conference that is coinciding with the announcement of Android 4.0 (Ice Cream Sandwich) and the Galaxy Nexus phone, Rubin is making some statements that make it sound like:

Yesterday we reported on Rubin’s troubling statement that he didn’t think there should be a distinction between Tablet and Smart Phone Apps. Given that Google isn’t talking much about Android 4.0 on Tablets yet, that is certainly troubling if not just eye-brow raising. Given that Google’s previous big attempt at Android on Tablets, Honeycomb, seems to be generally classified as a failure (it is certainly going to be bypassed) it makes you wonder if Google has anyone in its stable who understands Tablets. If this were politics Rubin’s statement would be taken as a strategic retreat. In the fast paced world of Mobile Tech, it sounds like, well, a strategic retreat. Especially if you’re a developer.

Google may be looking at a strategy here that aims to pull all of this together and on some levels you can argue for the logic behind that. But given that the Tablet market, currently owned by Apple, is still nascent, Google either needs to show some more coherent leadership here, or its going to see developers not only confused, but delaying any moves that might make Android Tablets begin to make sense. If Rubin is trying to play a Steve Jobs-like game (no one wants video on a small device) he’s not that good at the game.

And now, in the wake of Apple’s introducing Siri, Rubin is quoted as saying “I don’t believe that your phone should be your assistant” and “Your phone is a tool for communicating. You shouldn’t be communicating with the phone; you should be communicating with somebody on the other side of the phone.” Keep in mind, it’s still early in a world with Siri, so the jury is still out on personal assistants on a phone. But also note that Google has been the leader so far, in getting people to talk to their phones to search for data. If Rubin is just trying to deflect or poo-poo the competition he’s doing more harm to his own company’s efforts than he is to the competition. In addition to flying in the face of all sorts of data that says folks use Smart Phones more for data than as phones, Rubin just admitted that Google doesn’t have an answer for Siri that is close enough to pose a serious challenge.

I guess we’re used to executives making silly and harmful statements and that’s just a fact of life. But, at a time when you have the spotlight on your next big thing, it strikes me as more than problematic that Andy Rubin is shooting himself and Google in the foot while it is in his mouth.