Google Shows Off Apps for Glass at SXSW

Google is hyping up its Google Glass project by demonstrating how some popular apps would work on the heads-up display that’s part of Google’s wearable computing platform. The company has committed to launching its new Google Glass, which will usher in an entirely new form factor for running the free to use Android operating system, by the end of the year. And now, at the South by Southwest Interactive show, Google showcased apps like Gmail, the New York Times, Evernote, Skitch, and Path to attendees.

As reported by Engadget, which was in Austin for SXSW, Google Glass will use a combination of a visual and auditory interface for commanding the experience. 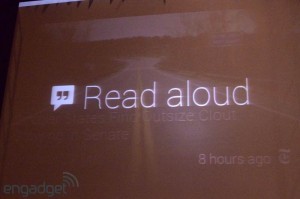 For example, with the New York Times app, which was built in collaboration with the newspaper and Google, users can ask for news and Glass will showcase the headline, byline, the main image of the article, and the time to show how recent the news story is. Engadget reports that “users can tap and have the eyewear read the story’s text aloud.”

Furthermore, it seems that Google and the Times are exploring on how notifications will work with Google Glass to display breaking news stories to users.

With Google’s own Gmail email application, the sender’s image and subject line will appear, and users can dictate their reply to email messages.

With Evernote and Skitch, Google is allowing direct sharing to these services with images captured with the camera mounted on the Google Glass.

Likely, more apps will follow as they’ll be built and tailored to Google Glass’ new user experience. Google’s Larry Page recently took to the Ted Talks stage to downplay smartphones, saying that they’re emasculating, to highlight the new experience of Glass and how users will interact with information and Glass.

Glass costs $1500 to developers right now, though Google says it will be priced for less than this when it launches to consumers at the end of the year.