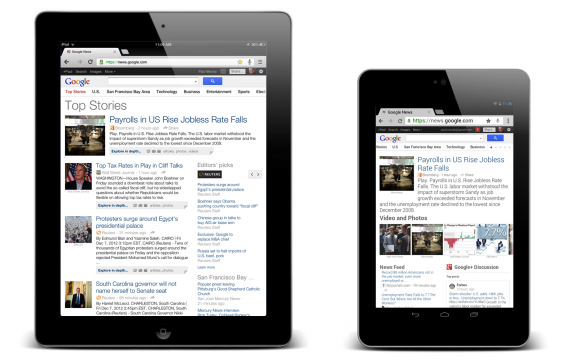 The company says that users will now be able to:

The experience, however, won’t be delivered via an app, but rather Google will optimize the Google News experience when readers visit the page through a web browser.

According to Google, the new experience has already begun to roll out and full deployment will happen over the next few days when U.S. users visit news.google.com on their tablets.

Google’s focus on the tablet segment is noteworthy as there hasn’t been as many tablet-optimized apps for Android. This was cited by many industry insiders as one of the reasons why Google had entered the tablet market itself with its own Nexus brand–to spur development of tablet apps. Apple had cited the lack of tablet-optimized apps as a key benefit to going with iOS and the iPad at the company’s unveiling of the iPad mini tablet.