Google added a fun little holiday gift and Easter Egg to the Google+ Android app rolling out today, one which will remind everyone of their childhood playing with a snow globe. Google+ Auto Awesome has received some neat features as of late, and this week Google introduced one more.

Google+ will turn any smartphone into a snow globe this holiday season, using the power of Google+ and Auto Awesome any photo on your smartphone or in the Google+ gallery can instantly be covered in snow. A quick shake (like a snow globe) and snowfall will appear right in your image. Google announced the neat new holiday trick earlier this afternoon on its social network. 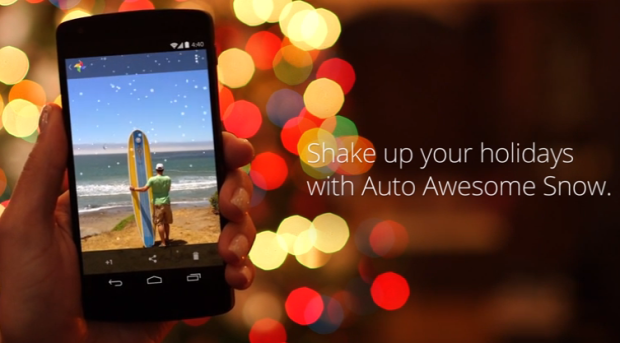 The new Google+ app for Android should receive an update today, and hidden inside is a new feature that will allow users to simply shake their smartphone while viewing a photo, and watch the snow fall. This is just one of many Google Easter Eggs, and one which should be quite popular during the holidays this year.

With nearly everyone having a smartphone these days, gone are the times of getting a snowglobe for Christmas. With most kids asking for a shiny new iPhone 5c or Galaxy S4 instead. As a result, Google’s taking advantage of this by making any smartphone essentially a snow globe. A quick shake and the snow appears.

The shake essentially uses Google+ Auto Awesome to turn any image into an animated GIF, which allows the snow to fall down your device, and from there users can enjoy it, and even share the image. One shake gets the snow falling, and a second shake will give you the option to save the photo as a GIF to share with friends and family. It’s a neat little trick, and the new Google+ app for Android with this feature should be available on Google Play later today.

Google+ may still be a ghost town but at least we have fun little tricks like the one mentioned above.