Google is beginning to streamline and unify its video chat service in a bid to become more consumer-friendly and avoid brand confusion. The Internet giant is now replacing Google Talk’s video chat feature and is re-branding the video calling service under its Google+ Hangouts moniker. The move will likely bring familiarity to the Google+ social network as Google attempts to compete against more popular services such as Facebook and Twitter, but will also allow Google to expand its video calling and help make the service more popular on the mobile Android platform as the company competes against Apple’s iOS FaceTime video calling service. 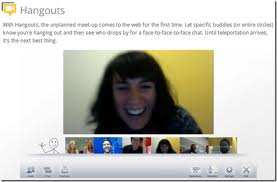 The move will allow Gmail users to now have the ability to call up to 10 Google Contacts simultaneously, up from the 1:1 video calling under the old Google Talk video calling service.

Unlike the old video chat, which was based on peer-to-peer technology, Hangouts utilize the power of Google’s network to deliver higher reliability and enhanced quality. While all Gmail users will experience these benefits, if you’ve created a Google+ profile you can invite up to nine other participants to your video meetings and take advantage of advanced features like screen sharing and integrated Google Docs collaboration.

Gmail users who have not signed up or linked their account to a Google+ profile will still be able to use the Hangouts video calling service, though those users will be limited to one-to-one video calling and won’t be able to have a call with up to ten people not the same video chat.

With Hangouts supporting up to ten callers simultaneously, Google is not only aiming at Apple’s FaceTime service, but also Microsoft’s Skype calling service. Google’s web-based video chat on the desktop and as an app on iOS and Android will make the service appealing to cross-platform callers.

The service is now rolling out to consumers on Gmail and corporate and enterprise Google Apps users will see the new integration in the coming weeks.