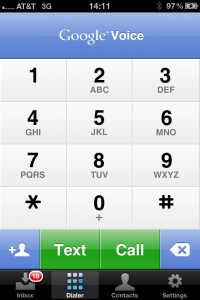 Well for those who have been waiting the wait is over. The official Google Voice App (iTunes link)  for the iPhone is now available. Yep, that’s right. Google’s own App.

You remember the saga. There were Apps initially allowed on the App Store that gave you access to Google Voice, then there weren’t. Google submitted the App quite some time ago and it never surfaced. Speculation and ranting centered on AT&T not wanting it, then it later appeared that Google Voice (and apps that gave you that functionality) were a casualty of the ongoing battles between Apple and Google over the mobile world. Remember the spin, Apple claimed it hadn’t rejected the App, they were just considering it. They didn’t say they were considering it on Rip Van Winkle time.

It then looked like the Feds stepped in, or threatened too, and Apple backed down. A couple of Apps using Google Voice have been available for about a month or so, but the official unveiling of Google’s own native App will have a decided impact, given that it is free. Of course you could also access Google Voice functionality through a web App during all of this.

I haven’t checked this out yet, but from what I’m reading you can make and receive calls from the App, as well as send and receive SMS messages. The App doesn’t take over the calling functions the way it apparently does on Android, but then I don’t think anyone was expecting that to occur. It also supposedly works well with the iPhone’s Push system.

I’ll be giving it a once over and report back, but if anyone else does before I get to it, let us know what you think.

Hmm? Maybe this was supposed to be what all that “day you won’t forget” thing was about.