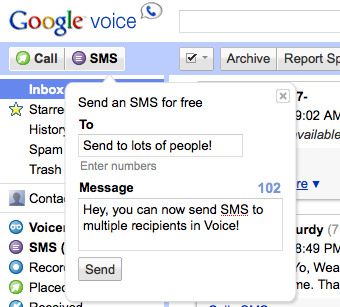 What was I saying about competition being a good thing for consumers earlier? Here’s a case where it works on our behalf. According to Lifehacker, Google Voice’s web app now allows you to send an SMS message to multiple recipients. This is a feature that is currently lacking on the iPhone natively. Remember the Google Voice web app was just released and is Google’s way of getting the very popular and very useful service onto the iPhone given that Apple won’t allow apps that use it in the App Store.