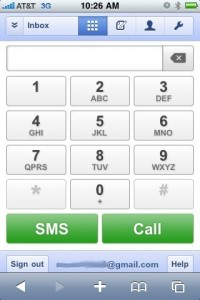 If you’re an iPhone or Palm WebOS user and you’re itching to “beat the system” with Google Voice, your life just got easier thanks to the new web app version of Google Voice.

The web app offers easy access to your inbox, a keypad for dialing out from GV, text messaging, contacts, and settings. The contacts are those in your Google account, not on your device, but that’s not a problem if you sync the two.

It’s not as spiffy as a native version. The dial out process on the iPhone functions like tapping a phone number link, asking permission to dial out before doing so. The need for connectivity to get to it shouldn’t be too big a hindrance since you’ll need to be connected to place a call anyway, but I’m sure it will take a noticeable chunk of time if you’re not in a 3G area and there are more taps involved.

Keep in mind though, you don’t need an app to receive GV calls, and it’s possible to dial out through GV directly from your phone (made easier by saving the dial out in your contacts).

Via Gizmodo. Update: Found the video demo, posted after the jump, hat tip to Lifehacker.