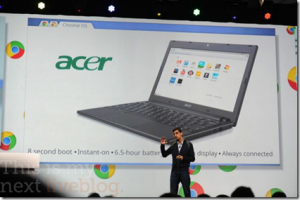 Adam already laid out the hardware specs for Google’s ChromeBooks that are going to be available next month. But there’s more than just hardware running a browser going on here. In fact, it looks like Google is actually quite serious about pushing the “all you need is the web” Chrome OS concept. I say that because I was one of those that thought Chrome was probably never going to amount to much.

Well, based on what I’m seeing and hearing today it looks like Google’s Chrome OS and ChromeBook announcements have superseded anything they had to say yesterday about Android. For those who’ve been following the Chrome/Android dual development cycles this is going to really add some fodder for those discussions.

First, Adam posted the prices that ChromeBooks will be available for. But think of those as prices for everybody who isn’t a student or isn’t attached to an enterprise. Google is going to make ChromeBooks for students for $20 per month and $28 per month for enterprise customers. That will include free updates and security.

But the big news is that Google is announcing its “web only” approach has finally recognized that offline access is a key to making that work. GMail, Calendar and Docs will be available to be used offline when this all kicks off this summer. While one of the Chrome OS tent poles is “always connected”, everyone knows that working offline has to happen somewhere and quite frankly, the always on, always connected mantra never measured up to me when it rubbed up against that little bit of common sense.

Google is also saying that the ChromeOS has matured enough to allow it to run Netflix, Hulu, Google’s music player (although early reviews of that aren’t so swift) and games like Angry Birds out of the box. And speaking of hurling feathered creatures at pigs, this Chrome web version of Angry Birds will allow the game to be cached so that you can, wait for it… play it when you’re offline. Again, that’s a game changer in my view. And Google is working with Samsung to bring a ChromeBox to market that will be essentially a desktop replacement.

Google’s “you can do it all on the web” is going to have a different appeal now.

UPDATE: I noticed that after I published this post that a lot of commentary on this is talking about this in the context of Netbooks. You remember Netbooks. They came, they are still around. They’re fading. Google just bought Netbooks a one way ticket to the “Land of Forgotten Gadgets.”