Google’s speculated launch of its cloud storage system dubbed GDrive may launch with 5 GB of free storage in an effort to compete against Microsoft’s SkyDrive, Apple’s iCloud, and other third-party services like Box and Dropbox. In the past, it was believed that Google would launch the GDrive branded service with 2 GB of free storage, but a recent leaked screenshot obtained by Talk Android shows that the service will launch with ‘5 GB from the start’ and that users can purchase and add additional storage space at any time. 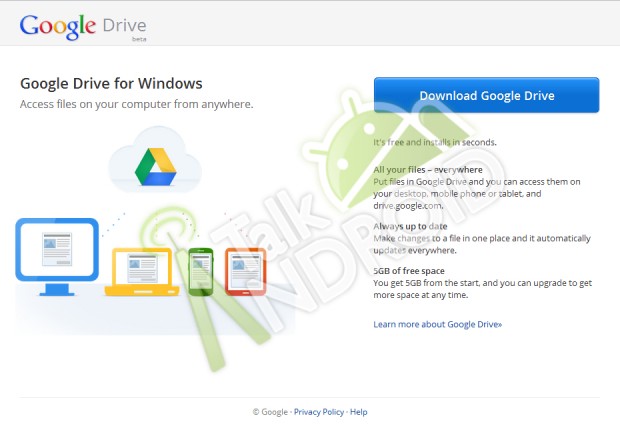 Additionally, from the leaked screenshot, Google is positioning its GDrive service to work on the desktop, laptop and Chromebook notebooks, smartphones, and tablets. The service is intended to allow users to ‘access files on your computer from anywhere,’ though with the freemium storage cap, that may not be all true. Unlike other file service remote desktop services, users must upload–either manually or automatically–files to the GDrive cloud to have access to them; it doesn’t sound like the service will allow for direct access to files on the PC, but that’s not clear all together at this time.

Google has been adding up capabilities to its disparate cloud storage systems recently. With the launch of Google Music, Google provisioned accounts so users can upload up to 20,000 songs to the cloud to stream at any time. Google also revised its Google Docs system to allow users to upload more types of files beyond the standard documents, spreadsheets, and presentation file formats. And Google Plus social networking site was updated to allow users to automatically upload photos captured on their smartphones to the cloud, and automatically uploaded images are stored without any storage caps.

Google Drive perhaps is meant to tie together some or all of these disparate services over time. Right now, Google says that users who make changes to files in one location will see changes appear on all their devices everywhere.

According to the site, Google is still on track for launching Google Drive on the week of April 16th.

In comparison, Microsoft offers 25 GB of free storage on its SkyDrive service.