Google’s new One Today application is all about easily providing funding for charity projects, and it could alter the way users give to charities.

Announced this week, each day One Today will present users with a project could have a dramatic impact on others and give them the option to donate $1. The charity focused application is currently only in limited testing, but could mark a fundamental change in the way users of Android, and perhaps other platforms, give to charity. 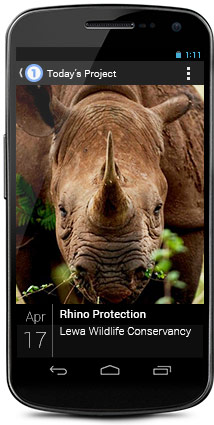 Google will initially choose a slate of organizations eligible to be included in the One Today application from its Google for Nonprofits program. But over time the application and service will learn more about the projects a user tends to fund and present them with similar charities.

Donations are charged directly to the payment option tied to the user’s Google Wallet account and are tax deductible in the United States.

Google did provide examples of what organizations it intends to fund using One Today to give potential users a barometer of where the app is heading. Organizations cited include Ashoka’s Every Child Learns Empathy, a project that seeks to teach empathy on the same levels as reading and math. According to One Today, $50 could bring empathy best practices to an entire school.

The Lewa Wildlife Conservancy’s Rhino Protection is also listed as an example project on One Today’s website. The conservancy aims to train 150 security personnel who’ll work around the clock to protect a habitat of 130 Rhinos from poachers. Every $2 donated would provide 1 hour of security.

Making it easier for users to support causes they care about isn’t too far away from the way website Kickstarter attempts to fund projects that wouldn’t otherwise get investments.

As newer technologies and media solidify into a viable alternative for television, charities and the organizations that support them have to find more relevant ways to reach today’s consumer. That’s especially important since a growing number of people don’t watch television or read a newspaper, two mediums that have historically been pillars of charitable outreach.

While commenting on the power of social media to SFGate, Julio Casconcellos creator of TwitCause, declared “People have come to accept that this [new media and technology] is the way to fundraise.”