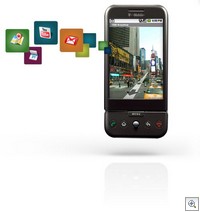 I’m much more interested in seeing what this means six months from now than what it means today, but today is the day that the long awaited Google Android phone launches via T-Mobile and it looks like the phone is called the T-Mobile G1. Of course with such an eagerly anticipated launch there are leaks, speculation, and guesses, but we’ll know the real skinny later today.

An interesting bit of speculation that is bounding about is that Amazon may be launching a a mobile media (tunes and flicks) store similar to Apple’s iTunes that would roll out on the G1. Again, that’s speculation, but if true, it would certainly be as much of game changer as Google Android itself. UPDATE: Looks like this is official. I’m finding myself preferring Amazon’s MP3 store to iTunes more and more, and I think there’s a growing trend towards that elsewhere.

Gizmodo also has a list of what they are calling Android’s Top 10 Apps and that will also be interesting to follow on the developer front.

Meanwhile Microsoft is saying that Windows Mobile 7 will be delayed until next year.