GoPro unveiled its new Hero3 camera today, along with an incredible demo video that features athletes using the device around the globe. The GoPro Hero3 will be available in time for the holidays in three editions, including a $399.99 Black Edition that can shoot video at up to 4k resolution.

Go Pro’s wearable and mountable cameras are used by athletes, videographers, outdoorsmen and others who value the cameras’ versatility, ruggedness and simplicity. The tiny cameras are powerful enough to use in broadcast television shows and documentaries. At $199 to $399, Go Pro’s cameras are perhaps the best bargains in the photography & videography world.

As expected, the GoPro upped the technical specifications in its new lineup, but what really matters is the quality of the video and photos that come out of them. As demonstrated in the above video, the Hero 3 is capable of capturing amazing footage. Of course the exotic locations, professional athletes, multiple cameras and killer video editing spice things up, but at the heart of the demo is crystal clear video and time-lapse segments that are relatively easy to setup and shoot compared to using more expensive gear. 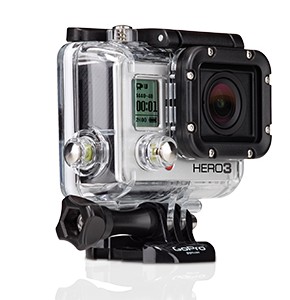 The GoPro Hero3 comes in four flavors, including the White Edition ($199), Silver Edition ($299), Black Edition ($399) and Black Edition Surf ($399). All of the models have Wi-Fi baked in, which means you can control them with the GoPro iPhone app. T

The Black Edition is the way to go for those looking to get the most out of the GoPro system. It has a glass lens that’s sharper than the other models’ plastic lens and can shoot video at up to 4k, albeit at a slow 15 fps. Standard 30 fps video can be had at 2.7k resolution and the camera’s 1080p mode can shoot up to 30 fps.

The GoPro Hero 3 is 30% smaller and 25% lighter than the Hero2, its predecessor. All three of the Hero3 models are available for pre-order now at GoPro.com and will begin shipping on November 14.