Corning had earlier announced that its chemically strengthened smartphone glass will soon find its way into the automotive sector and now we’re learning that the BMW i8 may become the first car to use Gorilla Glass. Gorilla Glass will help automakers like BMW reduce their car’s weight, which could lead to a savings in fuel costs, as well as provide better noise insulation so that less road noise would permeate into the car’s cabin.

The weight reduction, according to BMW, would be about 50 percent from the use of traditional auto glass. BMW is leveraging the weight reduction offered by Gorilla Glass to offset the heavy weight of the hybrid powertrain. 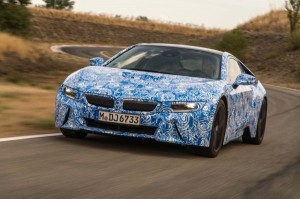 The implementation of Gorilla Glass on the sports car would “comprised of two layers, each 0.7 millimeters thick with acoustic sheeting between,” according to Auto Evolution.

In addition to these auto benefits, Gorilla Glass is also more durable than traditional glass and is marketed as being more resistant to scratches and breaks.

There has been an increased convergence between the automotive and mobile industry in recent years, with Apple rumored to be working on an iCar in the past. In addition to Gorilla Glass, we’re seeing apps, smartphone integration, 4G LTE connectivity, and the ability to control and manage your car via your smartphone. BMW had also experimented with various iPhone and iPad mounts for the vehicle as well.

The BMW i8 will be unveiled later this year and will go on sale next year, making it the first production car to be announced with strengthened Gorilla Glass.

Additionally, BMW had earlier announced that Apple’s Siri Eyes Free would be coming to its 2014 model cars.