A new Kickstarter project called the xWallDock turns a standard wall outlet into a charging dock for Apple products like the iPad, iPhone and iPods. The product creators promises to support both the current 30-pin Apple devices and new Lightning devices like the Apple iPhone 5. We think this is an interesting Kickstarter project that’s GottaBeFunded.

The xWallDock fits over various style wall outlets like dual socket outlets or quad-socket outlets. They will make versions that fits over rounded and square outlets. 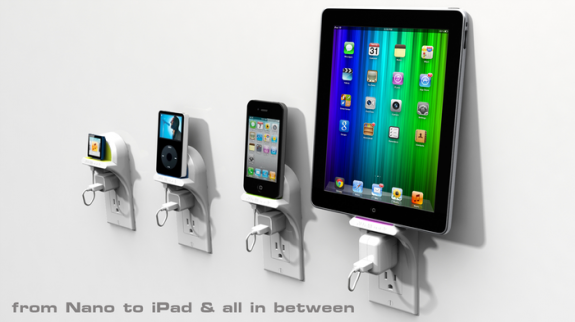 The makers will offer either gray inserts or colorful inserts or they will etch a logo on the insert to brand it. In addition to the single and double outlet, there’s a family pack with either 3 or 4 xWallDocks available.

Backers can choose from fourteen investment levels as follows:

This system seems to install easily by replacing the faceplate of a regular outlet. The colors will match most home decor.

Kickstarter projects come with some risk. Some people back a project and the project inventor will sometimes fail to come through for the backers, so pledge support at your own risk.

At first only 30-pin devices will work with the xWallDock. They will add support for the new Lightning connector that comes with the new iPhone 5. They will also add support for micro-USB ports that come on many Android smartphones and tablets. The first run coming as early as Feb. 2013 will include xWallDocks for traditional 30-pin Apple devices. The Lightning and micro-USB will show up a month to three months afterwards. The funding for this project must hit the goal of $27,000 by Oct. 14.

We’ve seen similar products that replace the entire outlet, but this one benefits from simplicity. Just change the faceplate of the outlet.