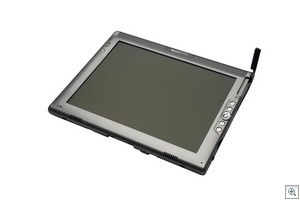 We are very pleased to bring everyone this first look at Motion Computing’s newest Tablet PC, the LE1700, in this special launch day video review. It has been about two years since the release of the LE1600, and many people were wondering if this day would ever come. It has!

In many ways, Motion has again set the bar for other slate Tablet PC OEMs to meet. With the introduction of SXGA (1400 x 1050 resolution), Core 2 Duo, and integrated broadband, it is clear that Motion listened to their customers when designing this new version. In addition to integrated broadband (carriers unannounced at this moment), the LE1700 also supports a SIM slot for HSDPA and 3G in Europe. Theoretically though, there is no reason why other SIM cards shouldn’t work for those of us in the states. Guess we’ll see as folks start buying them. 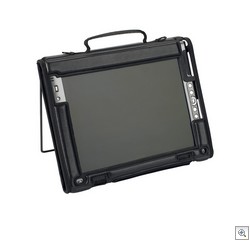 The other important addition to the LE1700 is the option for capacitive touch. Motion refers to this feature as WriteTouch. Other OEMs call it MultiTouch / Dual Mode, etc. This new option gives the user the ability to use touch and an active pen at the same time and works with the SXGA screen ( another first ), which is something we’ve all been asking OEMs for and Motion delivered. In addition to the active digizer model Motion sent us to review, they also sent us the WriteTouch version to examine. Unfortunately, the WriteTouch model we had was an early pre-production build and was not ready for a full fledged review. We hope to get a production ready model in the coming weeks and will publish a special InkShow when that arrives.

Unfortunately, the LE1700 still uses 1.8Ã¢â‚¬Â 4200 RPM drives. This is definitely a sore subject among many who were at least hoping for 5400 rpm drives, and should be something that Motion addresses with future models. The overall design of the LE1700 remains mostly unchanged with the exception of some lights moving to a different side to accomodate the broadband antenna, a SIM slot, and the casing slightly raised up compared to the LE1600.

In this InkShow, I take an indepth look at the SXGA Active Digitizer model, go over the different digitizer versions, compare XGA to SXGA, show Aero running on it, and also look at the extended battery and the slightly improved convertible keyboard. In addition, I demo a very unique feature of the fingerprint reader that allows it to also function as a trackpad.

Thanks go out to Motion Computing for sending us the review units, and also to John Hill of Allegiance Technology Partners for his unique role in this process. 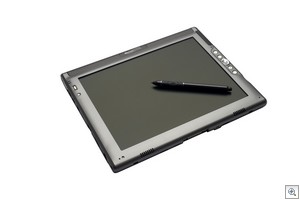 Here are a couple of notes from the show that I failed to mention during the video or bear worth repeating:

Here are the specs, as well as a link to the LE1700 product page ,and Motion’s official announcement . You can view the PCMark05 results below: