GottaHaveFMRadio: Should FM be mandatory in mobile devices? 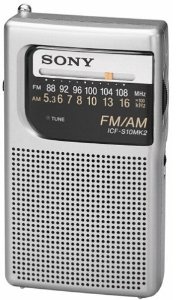 In their usual in-depth manner, Ars Technica has been covering the fight by radio broadcasters for a Congressional mandate that all mobile communication gadgets include FM radio receivers. Where do you stand on this?

My opinion on FM in mobile devices goes back to something I wrote four years ago, which I think still stands.

It being a time to remember tragedy and emergency [following the five-year anniversary of 9/11], it should be noted that radio remains the most reliable means of disseminating information to a large number of people. In an emergency, everyone tunes in to the news, and that kind of usage would clog the local Internet tubes. By contrast, volume of listeners has no effect on the speed of FM radio. In situations when time is a factor, FM remains the rock solid solution.

On a more day-to-day level, FM radio remains a top source for talk shows, an area podcast listeners can appreciate. And unlike satellite and most Internet sources, radio is local. For local news and events, radio is often the only listening option.

I was reminded of this recently when one of my co-workers had to deal with a massive power outage in Silver Spring, MD. Her entire town was off-line for nearly a week following a major storm. This included all the cell towers, cutting her off from any digital communication. Her only source of news and updates was the radio in her car. She had to buy a portable one along with other supplies after coming to work.

Personally, I don’t care for FM radio, but that’s due to content (and bait and switch games), not technology. The occasions when I listen to radio are few, but I like to have one in the house in case of emergency, and emergencies are why I support including FM receivers in mobile devices.

As far as it being mandatory, I don’t see a problem with that either. We already mandate much more invasive technology in mobile phones, such as location tracking, for emergency use. The tech is cheap and unobtrusive, so much so that the iPhone 4 Broadcom chipset includes an FM transmitter/receiver that is mostly dormant (used only for Nike Fit). If Apple can squeeze one in to the super-slim 4 without a price bump, every other vendor can too. And while the mandate proposal is motivated by selfish interests, I don’t think that should negate its overall merits.