This has been such a wacky year for me personally (actually the wackiness began in 2012) that I almost find it hard to believe I made mobile tech predictions for 2013. But I did. So in this post I’ll grade how I think I did before I put on my psychic cap and post my predictions for 2014. You can play along if you like. If I was a baseball player my batting average would have me making millions. But alas, I’m not. 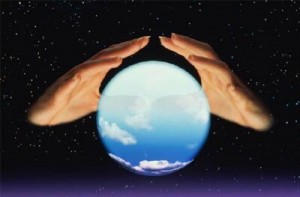 2013 certainly was a crazy year. In some ways it was a year with lots of chaos that seems to have inched the big players a little closer to some sort of parity in the minds of consumers. Or perhaps consumers were just focused on pocketbook practicality more than they were on innovation. At least that’s how it feels this holiday season. Many of the measurements that have traditionally defined the winners and losers are being revealed as irrelevant. They’ve always been largely irrelevant because it’s the consumers who make the decisions when the players can provide the product and a consistent and compelling message to sell it.

While we might be inching closer to parity there are still leaders, those playing catch up, and those that finally quit the race. Apple and Google are still battling it out for the lead. Microsoft is still trying hard to catch up, and having some success. Amazon is still its own thing, still making inroads and improving the tech in its Kindles and services. That continues to make the leaders a bit nervous. RIM has become a corpse without a casket or pall bearers to bury. Samsung is still pushing hard and actually finding ways to market and create good quality products that make a difference, when it isn’t cooking the benchmark stats. Nokia will become Redmond’s headquarters on the Baltic when Microsoft takes over as Steve Ballmer prepares to step down.

Everyone is at least pretending to care about privacy and data security in the wake of the Edward Snowden leaks. Privacy will continue to be a big story in the next few years just as the tech and service companies are making moves to turn our mobile devices into money and us into targets for sensor fed advertisements.

Content players and content providers are starting to finally figure out that more is more. Social networks are going public and trying to find a balance between the users who created their value and the stockholders who want it. Print media and journalism still hasn’t figured out how to cope with the Internet and stay in business and for some reason advertisers still keep advertising and paying for it all.

That’s a quick preamble to how I think this past year played out and here are my specific predictions going into that year and how I scored them.