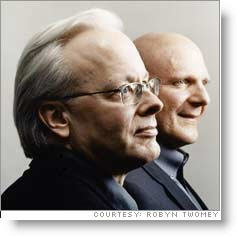 I just read a great story on CNNMoney.com, By David Kirkpatrick, a senior editor for FORTUNE magazine. One of the best and most detailed articles I have read in a long time about the direction of Microsoft, and the use of their top staff to move the organization into the future. If you are interested in Microsoft, in how the future of it’s work will affect all mobile users, this is a must read. As I read about the internal struggles (good struggles) they have been going through in the last year, particularly after hiring Lotus Notesand Groove Networks exec Ray Ozzie, I must say I was encouraged. If the information is to be believed, there is a very customer centric consideration for where the company is going, and a determination to change the company to meet that goal. Now I am quite sure there will be plenty of “Evil Empire” promoters out there that will see this as another attempt to take over the world, but if they do, they did not read the story in the context of growing Microsoft to meet user needs. Anyone who has ever worked in an organization where maintaining a strong mission and shared vision is important will identify with the struggle Microsoft has undertaken. This story gives you details on how they have dealt with it.

As mobile workers and people in general, we are and will continue to be dependent on innovation to take us off our desktop and into the world. That means internet focus. We’ve all heard about Microsoft’s wanting to be internet focused before, but this story strongly suggests the move away from desktop installed apps, and into the online services model. I look forward to the day when I no longer need to install updates, deal with incompatible versions, etc.

This a long and detailed story, read it all, and see what you think.

Microsoft’s new brain
Brutal competition. A stock going nowhere. Microsoft is in crisis, so Bill Gates has unleashed his new hire, software genius Ray Ozzie, to remake the company – and conquer the Web.

“…….. Having Ozzie around frees Gates to attend to other things. He spends a lot of time as company ambassador, calling on CEOs and government leaders. He doesn’t say so, but some who know him well say he also appears to be more engaged with the global-health work of the Bill and Melinda Gates Foundation than with Microsoft. Does Ozzie’s growing role at Microsoft mean Gates’ is declining? Asked that question, Gates hesitates. “The big-picture strategy here at Microsoft isn’t just a single-person job,” he begins. Then he explains that there are five people he considers responsible for it, starting with himself, with Ozzie next. (The others are David Vaskevitch and Craig Mundie, both CTOs, and Rick Rashid, who heads Microsoft Research.)

But Gates also says the strategic shift toward services “wouldn’t have happened if we didn’t have Ray to pull it together.” He says his own job is to take the largest possible view of the company and make the biggest long-term decisions, like whether to keep investing in the tablet PC, or to move into Internet telephony. Ballmer, when he’s not promoting Vista and the new Office – which, after all, is where Microsoft will be getting almost all its profits over the short term – has been serving as ad-salesman-in-chief. He recently spent a day in L.A. meeting with marketers from companies like Nestle and Toyota (Research), talking about online ads. Microsoft is becoming a media company………..”.